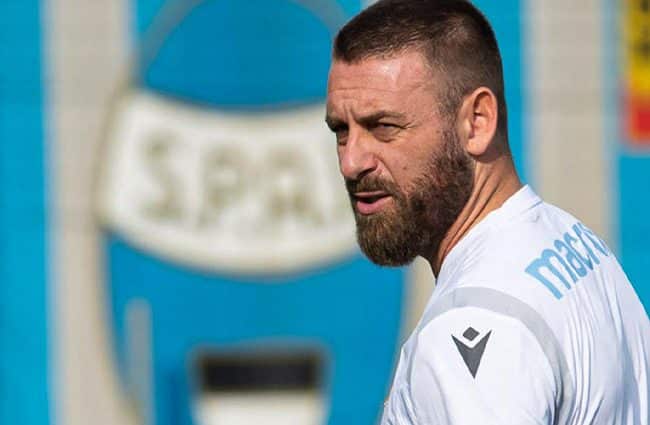 Former Roma midfielder and captain Daniele De Rossi held his first conference today after being unveiled as the new manager of Serie B side SPAL.

The 39 year-old was appointed by the club’s president Joe Tacopina, a former Roma executive, to replace Roberto Venturato, who was sacked on Monday after the team’s loss to Frosinone.

“I want to start by thanking the (technical) director (Fabio Luppo) and all the people who welcomed me here in Ferrara,” began De Rossi.

“Even though I’ve been in football for 30 years, I have to admit I was a bit nervous walking into the dressing room in an entirely different role.”

“I also want to thank Joe (Tacopina). He and I talked about working together as manager and president even while I was still playing. We have a great friendship and I hope to repay his trust, its given me a ton of confidence.”

He continued, “He’s a dreamer, a winner. I believe the only one to achieve three promotions in a row. He’s respect throughout the football. The first training session was a bit nerve-wracking, the same feeling you get from going to primary school to high school.”

“However, I feel ready and prepared for this moment, I’m not afraid. We’re creating and merging the staff and I couldn’t be happier with the guys who work with me and the people already here at SPAL.”

“I also want to thank the Malta national team for allowing (Guillermo) Giacomazzi to rescind his contract and join me here in Ferrara.”

De Rossi then addressed the current state of the team and which tactical set-up and formation he’ll utilise ahead of Saturday’s clash against Cittadella.

He admitted, “We’re still discussing it (the formation). We have to analyse each match but we’re aware of the work that needs to be done. Venturato did a good job here and had a strong spell when he was with Cittadella.”

“For me, it’s fundamental to base things on the pieces at your disposal. I don’t like managers who have certain players playing in a single scheme.”

Lastly, “I promise not to make any promises to the supporters that I’m unsure if I can keep it them or not. I promise my team will play intelligently and with a lot of heart.”

“We have to give 100% every single day in every single match. We’ll be playing in front of supporters in a stadium that will give us extra motivation.”

Finally, De Rossi gave a brief shoutout to Roma supporters for the congratulatory they sent him.

“I’ve got 400-500 unread messages but I want to say thank you to anyone who took 30 seconds to congratulate me. I can’t mention one person because it wouldn’t be fair to the others.”

“Though, I’ll add a slight asterisk for Romanisti. They’ve followed me my entire life and never stopped showing me love and affection: they know the feeling is mutual.”