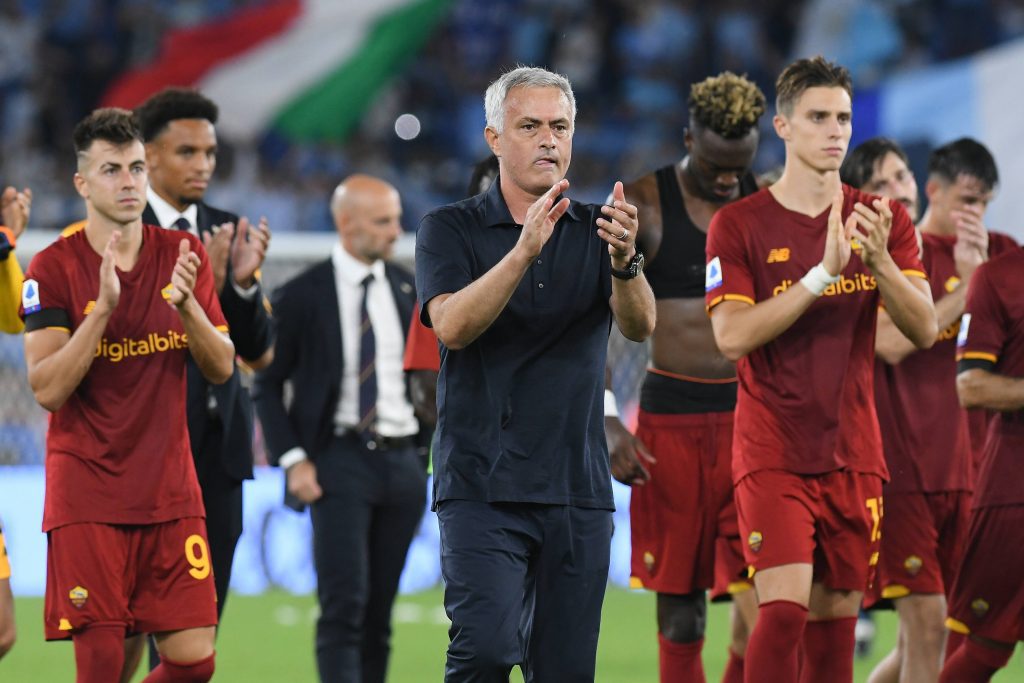 Jose Mourinho & Co. began their league campaign on a perfect note, that is, until Igor Tudor’s winless Hellas Verona side came along and inflicted the Giallorossi’s first competitive defeat of the new season on Matchday 4 of Serie A.

The Stadio Olimpico has long witnessed its arsenal of game-changers, both on and off the bench, charismatic individuals who have etched their heart into the ancient city with their passion and undying spirit. Examples include Francesco Totti, Bruno Conti, Cafu, Giacomo Losi, and managers such as Nils Liedholm, Fabio Capello, Luciano Spalletti and potentially the current Portuguese tactician.

The former Real Madrid manager has an assignment on his hands, which he himself terms as not the Mourinho project, not the Tiago Pinto project, but the “Roma project.”

Having arrived in the capital city in a surprising appointment by Dan and Ryan Friedkin, on the back of a disappointing spell at Tottenham, the ex-Inter coach has a gigantic challenge ahead of him. A challenge reminiscent of his early Porto days, although he is now backed by a much better financial outset.

The Special One has for most of his career been perceived as a second season master. He won the Champions League with Porto in his second spell, the treble with Inter in a similar manner and famously ousted Pep Guardiola’s Barcelona with Real Madrid garnering a record 100 league points in 2011/12.

His game management skills with no doubt take some time to catch up with Roma’s doctrine but his tactical prowess, technical versatility and two decades worth of experience is assured to do the Giallorossi more good than harm. It’s too early in the season to see any kind of Mourinho-esque philosophy being adorned in Roma’s playing style but from what we have witnessed so far, the team is a sufficient upgrade for contesting the league title, as they have proved so far.

Mourinho is undoubtedly a pedigree coach – someone who can be relied upon to deliver the results and Italy is familiar territory. He knows how it works in Serie A, having mastered the football here during his Nerazzurri days. Roma, however are a different bunch. The last title to arrive in the capital was more than a decade ago – the 2007/08 Coppa Italia – and the last Scudetto 21 seasons ago in the 2000/01 Serie A, under Fabio Capello.

With 31 players, including a host of worthy arrivals such as Tammy Abraham and Rui Patricio, Mourinho possesses a decent squad to upset the odds. The Portuguese has constantly utilised an attacking 4-2-3-1 formation for much of his career and that has continued into the current season. His Roma side have been a free-scoring outfit – averaging 3 goals in every competitive game so far.

Flexibility within the midfield four or five has always been one of his team’s trademarks – referring to his impeccable adaptability during his Porto stint wherein he employed a 4-4-2 diamond in tandem with the personality of the players at his disposal. At Roma, Bryan Cristante and Jordan Veretout form a creative shield infront of the defensive four, allowing Nicolo Zaniolo and Henrikh Mkhitaryan to operate on the wings, along with the versatile Lorenzo Pellegrini as a trequartista to feed Tammy Abraham in the final third. Perhaps, the defence is only aspect that is comparatively weak.

Roma have not encountered any major heavyweights so far, but one can foresee teams such as Milan, Lazio and Juventus struggling to uphold the Giallorossi’s tactical prowess and versatility. The team is already beginning to reap rewards of adopting to the formation intended by the coach, the same set up that rewarded him at Chelsea and Real Madrid.

Can Roma do it?

According to statistics provided by bookmakers, Roma are well behind Inter, Napoli, Milan and Atalanta for clinching only their third ever Scudetto title. However, few legends of the sport think otherwise.
Francesco Totti himself, who last lifted the Serie A title for Roma, said: “We have brought in the best coach in the world.”

One can garner knowledge of how betting markets operate and football odds work through top football betting sites that can also provide healthy recommendations for odds-on-favourites for first time users. Players whether old or new, can avail a whole range of rewards such as free bets, cashbacks and loyalty points.

Roma is Mourinho’s chance at redemption, especially after inferior spells by his standards at Manchester United and Tottenham Hotspur. His stints at previous clubs have never been built on a long-term dynasty-like outlook, but rather from destroying and rebuilding teams. It’s safe to say that that the club is still under development and it would be quite some time before we see a well-gelled Roma machine go all the way to lift the Scudetto – this season perhaps.