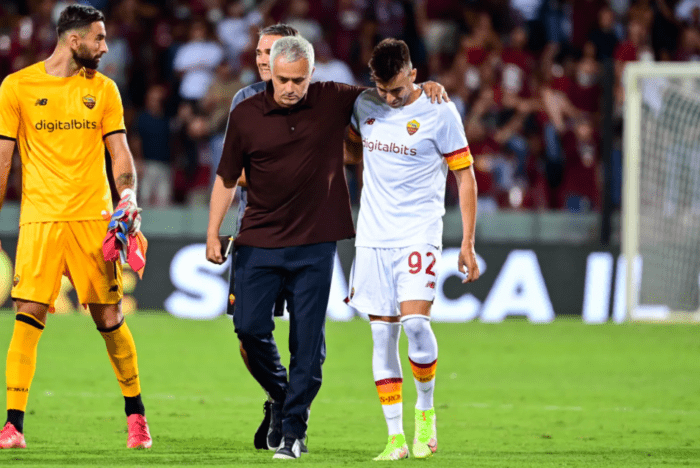 During the international break, Stephan El Shaarawy spoke to the club’s official channels and shared his thoughts on the season under way, Roma’s new ownership, Mourinho and more.

The following interview was released by the club:

“I’m good. I feel better physically. I’ve recently had more consistency in terms of playing time and I feel I’m in better form.”

“Scoring goals certainly helps and when that happens it makes you feel better mentally too. Things are going well from an individual point of view, but we need to pick ourselves back up as a team to return to where we were at the start of the season.”

Having regained your fitness, do you feel you now have more confidence than at the start of the campaign?

“When you get more minutes under your belt and are back on the scoresheet, you play better overall and that helps psychologically. At the start of the campaign, a player always has to be ready to grab any opportunities.”

“I’ve managed to find my place in the team with the season already under way and it was worth the wait.”

What were you missing specifically?

“It was mainly a physical thing, given that I hadn’t taken part in a proper pre-season in three years. I had to take my time, but I always gave my all and I never felt pushed to one side. I’ve always had a good connection with the boss and he’s always been appreciative of me and my qualities.”

“It’s as if I never left. That love from the fans never faded.” Do you remember uttering these words?

“I remember them well; that was me. The emotions I felt when my return to Roma materialised are still very much alive.”

Could you tell us about your connection with the team and the city?

“It all started in my first game. I introduced myself by scoring a back heel at the Olimpico, which was a dream come true as a footballer.”

“When I left [the club], I understood the connection on a deeper level. I had built a family here and had so many relationships. I always felt I had a strong link with the fans. They showed their support for me even when I was far away and their love meant so much to me.”

“I really hope to stay here for a long time because I’m happy and feel at home.”

How was your experience in China?

“I’ve always got on well with everyone in every team that I’ve been part of. I made friends out there on and off the pitch. I also won a trophy in China and it was a wonderful experience for me.”

You’ve scored 48 goals for Roma, one more than Bruno Conti, who is a legend at Roma and also in Italian football. How did it feel to get past his tally?

“It was such a happy moment. Every goal was very important to me and made me feel pleased, but I mustn’t stop there because I think I still have so much to give to this club. I always want to give more.”

You got your first goal of the season against Sassuolo when everyone in the dugout ran towards the Curva Sud. What went through your head before you shot?

“I always say that when you’re in the moment, you don’t need to think because if you do, you won’t score and might take a horrible shot. I didn’t think and the ball just went where I wanted it to.”

“That’s my sort of curling shot, but it wasn’t the easiest one. The ball was bouncing and I could’ve easily smashed it into the stands. I didn’t even realise what had happened after the goal.”

“I then saw my team-mates running over and I headed to the Curva. It was incredible. I hadn’t played in a few games and that goal was a big release. It was also the boss’s 1,000th game, so it was a big deal.”

Could you feel the pressure of Mourinho’s 1,000th game in the dugout or did he only reveal afterwards how much that milestone meant to him, as he did with everyone else?

“We knew about the milestone because it was in the papers and on social media, but our aim was just to win the match for Roma. We wanted to clinch a team victory.”

“He did a good job of getting that message across to us. There were only three points at stake and not a personal target. That’s all that we were focused on. The following day, he treated us all to dinner and only then did he explain to us how much the Sassuolo game meant to him.”

Is there a particular goal of yours that you cherish the most?

“My first one against Frosinone was so important because I was off the back of a difficult spell in which there had been quite a lot of doubt surrounding me. That goal was effectively my rebirth.”

“On an emotional level, it was an incredible feeling to score the first of my two goals against Chelsea at a packed-out Olimpico in the Champions League.”

Did you find coming back to Serie A last winter harder than you expected?

“It was harder, yes, mainly from a physical point of view. It wasn’t easy to get used to the tempo here again. In China, from November to January I was only able to train on my own. I didn’t have a team to train with.”

“I tried to do my best to come back here in the best condition possible but it’s not easy when you training individually because there’s no team play, no shooting or passing practice. I did adjust again though and managed to do my bit to help the team towards the end of the season.”

What did you think when Roma announced Mourinho was joining in May?

“It came out of the blue. But then I understood the club had serious, ambitious plans.”

“It’s a long-term project but we’re professionals and we must put every effort into obtaining good results as quickly as possible.”

“Having a coach like him is hugely motivating and helps you find an extra gear. He’s a brilliant man-motivator and he gets on so well with everyone in Trigoria, not just the players.”

“He’s the sort of coach you like listening to. He knows how to get you really fired up. I have a three-year contract and hopefully he’ll stay here as long as possible.”

What are you getting out of the work you do with the coach and his staff on a daily basis?

“I got off on the right foot with him and his staff straight away. They’re very capable. We’re all pulling in the same direction and that’s the most important thing. We’ve bonded as a group, we’re all united and working for the good of Roma, not for any personal interests.”

What has the coach asked you to do personally?

“He wants me to chase very aggressively when we’re trying to win the ball back. He wants me to help out defensively too. He wants everyone to pull their weight to help regain possession.”

You’ve played on the wing, sometimes asked to cover the entire flank as part of that. Is that a new role for you in terms of having to run more and help out defensively?

“it’s not completely new: I’ve played in that position for Italy before, in a 3-5-2. I know it takes more out of you physically but I don’t mind that. If the boss asks me to play there, I’m happy to do so.”

Results have been up and down in this first part of the season. You’ve had some good wins, but you’ve also lost six games. How do you see things at the moment?

“We feel very confident. Even when we’ve lost in some of the bigger games, we’ve played well. We’ve been unlucky with certain things going against us in games but we know we could have hurt the teams above us more.”

“I’m 29 so I’m not a youngster anymore and I know how these things work – it’s never going to be plain sailing when you start out with a new coach and new ideas. We’re all improving here together. The club has ambitious plans and we all want to prove ourselves. We want to be successful and repay the fans for all their support.”

Do you sense the owners’ ambition in the dressing room?

“They’re around the place and they make it clear to us every day, through their actions as well as their words. They got one of the best coaches of all time and didn’t think twice about buying a player like [Tammy] Abraham.”

“It wasn’t an easy situation to manage because they needed to sort out the futures of a number of players. They remind us how important it is for us to qualify for the Champions League this year. All we can do is repay them by doing our jobs as best as we possibly can.”

Now you’ll be looking to get going again at Genoa now.

“That’s right. We must focus on getting three points at a time.”

“It hasn’t been easy but we can pick ourselves up by preparing for games as best we can and going the extra yard on the pitch – through talent and hard work. Genoa could be just the opportunity we need to get going again and start putting a decent run together.”

What sort of targets are you setting yourself this season?

“I just want to do my very best, for myself and for Roma. I have to help the team to succeed. Another goal of mine is to earn a recall to the Italy squad. We have the play-offs now and it would be great if I could be involved come March. If that happens, it will mean I’ve done really well for Roma, and that’s what I hope will happen.”