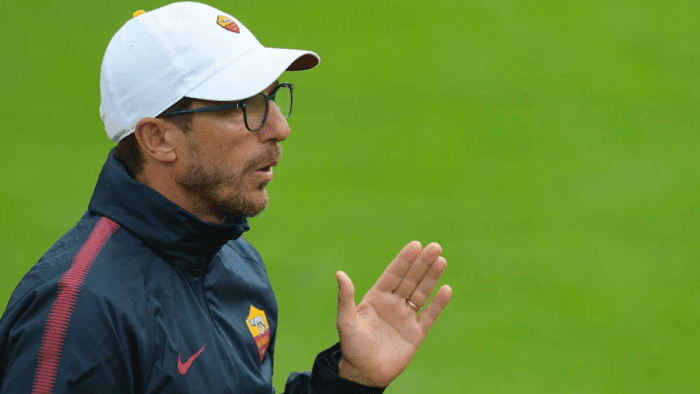 Eusebio Di Francesco became the manager hired by Monchi to replace the departed Luciano Spalletti and will be in charge of Roma’s new regime, the first one without Francesco Totti. A former Roma player himself, Di Francesco is an offensive-minded manager who belongs to the new wave of Italian managers.

He’s a believer in an attacking style football played on the wings, with overlapping full backs and forward runs from the midfielders. It’s pleasing on the eye, but it never loses its sense of balance. Many pundits drew comparisons between Di Francesco’s favorite 4-3-3 formation and Zdenek Zeman’s (his mentor) 4-3-3, which is a bit exaggerated because Di Francesco’s sides are well-organised in defence and are usually not exposed to the opponent’s counter-attack as Zeman sides often are. Furthermore, Di Francesco isn’t as 4-3-3 dependent as he recently lined up his Sassuolo side in a 4-2-3-1 shape in some matches.

So, who is Di Francesco and what do Roma fans really expected from him?

Di Francesco began managing Sassuolo in 2012, in Serie B, and has remained there for a 5 seasons stint (slightly interrupted by a brief Alberto Malesani stint in 2014). During this time, Di Francesco improved Sassuolo each year until he took Sassuolo to the Europa League last season.

Around this backbone Di Francesco went to build his 4-3-3.

Di Francesco’s 4-3-3 is organized in order to form triangles and generate passing lines around the ball carrier.

He likes to build the play from behind through the centre-backs, who split with each other the duties on this first offensive phase. That said, Acerbi still is the favorite player from which build-up play is initially started through the center.

In the midfield, Magnanelli is the regista and he’s highly involved in the construction phase as he’s the main target of the passes from the centre-backs as play progresses through. Magnanelli is a key player in Di Francesco’s style of football as he’s able to mix short and long passes at the right time and sync.
The construction phase also involves the full-backs, who alternately push high up the pitch to support wingers or overlap them. The interior midfielders have the duty to both support the offensive phase and to help defensively.

With the team in possession, those players occupy the centre-halves from which they can support the offensive trio or attack the penalty box. But they often move themselves outside overlapping the wingers in the way to build a triangle with wingers and full-backs.

Up top, both wingers are mobile usually cutting inside to centrally converge. The reason behind this movement is to exploit the space behind the opposing midfield and create combinations between wingers and interior midfielders with the centre-forward offering support or pushing the backline down.

So, when in possession, Sassuolo’s Berardi and Politano would generally position themselves in the centre-halves to establish a stable ball circulation.

Additionally, Berardi was also used as a target man for lay-off passes as he’s strong and sized enough to protect the ball before passing it.

These organized movements were particularly visible in attacking transitions, which were a dominant key for Sassuolo under Di Francesco.

That explained, Di Francesco’s side is really vertical-oriented with the main goal to attack depth with the full-backs or the interior midfielders providing width. Sassuolo’s attacks still ended up through the centre. The lateral zones were still used adequately, but the main reference point was always the centre. As aforementioned, Di Francesco alternatively lined up Sassuolo in a 4-2-3-1. Based on their mechanisms, this could be transformed into a 4-2-4, with the attacking midfielder pairing the No. 9 up top leaving some gaps to play through the central midfielders and the four forwards.

When defending, Di Francesco’s Sassuolo would operate out from a classic 4-1-4-1 with Magnanelli operating in front of the defence or in a 4-4-1-1 with Pellegrini playing behind the striker.

From that position, Pellegrini would push on to join the central forward in the first line of pressing.

The whole side is disciplined, especially the backline. Over there, Di Francesco asks them to play as a compact unit, primarily focused on the ball positioning. Sassuolo’s backline is ball-oriented, i.e., the first reference for defenders is the ball.

That means the defenders are united by a kind of invisible chain, maintaining the right distance each other. Sassuolo rarely break the line. So, when the ball-near full-back pushed higher, the gap between the centre-backs remains close with the ball-near one covering.

Under Di Francesco, Sassuolo was a good side that played attractive football. While in Rome, Di Francesco will probably have a lot of work to do, should he stay faithful to his principles.

On the defensive side, Spalletti’s backline is a man-oriented unit influenced by the opposition. Sometimes that’s exposed it with some teams able to exploit their poor positioning. So, Di Francesco will have to adjust it in the way to install his collective defensive positioning with the ball as the main reference.

Losing Antonio Rudiger doesn’t help and could cause them some problems as that the individual level of the backline doesn’t appear as high as it should be for a top team.

On the other side of the ball, in Daniele De Rossi the new manager will meet a footballer used to play as a pivot and also able to drop between the centre-backs when needed.

An interesting topic to be discussed will be the role of former Lyon playmaker Maxime Gonalons. Brought on as an alternative to De Rossi, Gonalons still is endowed with the needed skills to play in front of the backline. Should it happen, Di Francesco could flirt with the idea to move up De Rossi as interior midfielder. That’s the role in which the team’s captain enjoyed success during the first part of this career but this is also a spot where he refused to play again.

Gonalons/De Rossi dualism aside, Roma’s roster is built to play a possession brand of football, a very different style of play from Di Franscesco’s favorite one.

Spalletti’s side was filled with a lot of ball-carriers with a heavy emphasis on controlling the ball and dictate tempo.  Instead, Sassuolo’s aim was to play fast toward the net going vertically.

Monchi quickly started a roster turnover but it is still probable that Di Francesco will have to adapt his tactical principles. Otherwise, the new coach will have to convince his new players to play more aggressively.