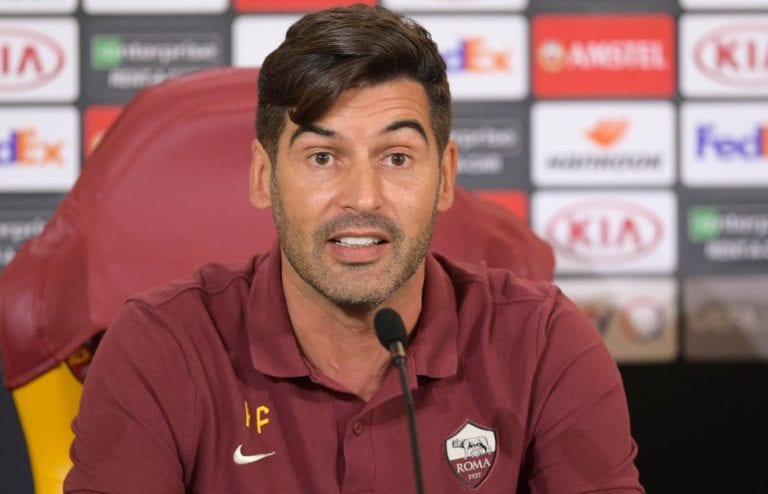 Roma boss Paulo Fonseca and goalkeeper Pau Lopez spoke at the pre-match press conference today ahead the Giallorossi’s Europa League tie against Borussia Mönchengladbach. Here’s what the pair had to say:

How important is this competition for Roma?
Roma must always think about winning. We always play to win – it doesn’t matter which competition it is, all we think about is winning the next match. Our next one is tomorrow against a great team and we want to win.

Is tomorrow’s match decisive? Do you think the referee will pay more attention following the non-penalty given in the first leg.
It is more decisive for Borussia, but it is important for both of us. It will be a different game. We don’t think about the referee, that’s in the past. Let’s think about tomorrow and fighting as one to win.

There have been a number of injuries this season. Would you and the players be willing to cut your salaries to play fewer matches?
Sure, why not. I am willing to do anything, including losing money so that there’s a better display. Everyone enjoys watching football on the television, myself included. At the moment, too many matches are being played and this prevents teams from having their best players available. For me, everything must be reconsidered and we have to find a more rational way to balance the calendar so that we can avoid problems such as this, especially for top European clubs.

Florenzi hasn’t featured recently. What have you said to him? Will he play tomorrow?
He’s ready to play tomorrow. I’m not talking about the conversations I have with the players. He can play in different positions, we’ll see tomorrow whether or not he plays.

What are your thoughts on turnover?
With so many matches, changing players is important. At this time, though, it’s not possible for us. The truth is that if I was able to I would change things for tomorrow but it’s not.

In the first five match days, Roma conceded 9 goals. Since then, it’s been only 3.
I don’t know, the team is learning and will continue to do so in the coming months. Many new players have arrived as well as a new manager. It’s just a matter of time: we try to win by playing well. We’re continue to work and grow.

Did you play with the ball at your feet this much at Betis?
I played with the ball at my feet, but not like this. The manager has helped me grow a lot in this regard. I’ve been lucky to continue to be called by the national team thanks to him.

A Spanish side have won this competition six out of the last ten times. Have Italian teams snubbed this competition? Where can Roma arrive?
I’ve always thought Italian sides were strong. It’s a competition I like and an important one for the entire team. We’re taking things match by match.

Who’s the goalkeeper you watch and study to help improve?
I don’t study anyone, but I do like learning from all the goalkeepers. I can learn something from everyone.

Who’s the strongest goalkeeper in the world, in your opinion?
I don’t know – it’s hard to discuss only one. Oblak and Ter Stegen, for me, are ahead of the others.