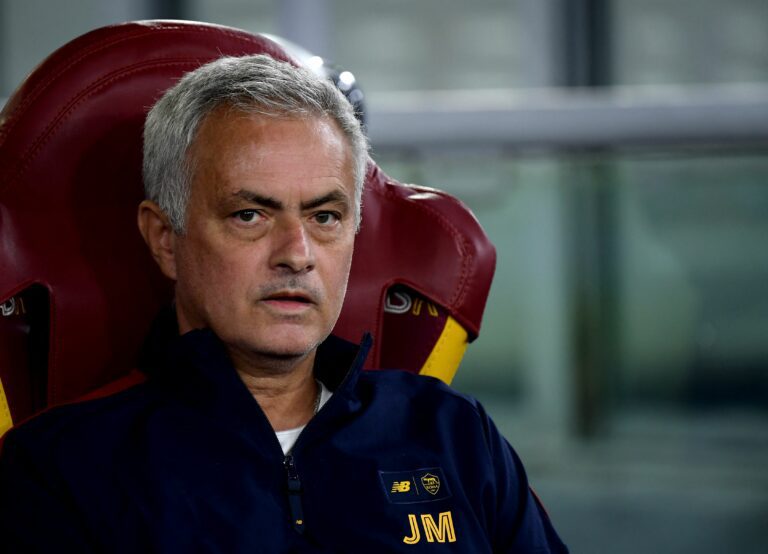 Roma manager Jose Mourinho spoke in today’s press conference about the team’s need to bounce back following a deflating effort in the Derby della Capitale on Sunday in tomorrow night’s clash with Sassuolo.

The Special One’s first remark concerned Roger Ibanez who has been the subject of several criticisms after his costly mistake versus Lazio and the missed Brazil call-up for the World Cup.

“Tomorrow the one whom I can say will play for certain is Roger Ibanez. Tomorrow it will be him and ten others,” Mourinho told reporters.

“Since the day I arrived, Ibanez has given everything for the cause. Last season there was a period where he was the only central defender available. His mistake? When we lose, we all lose. When we win, we all win. That’s it: he’s untouchable for me.”

“Volpato’s decision to decline Australia? It was his decision, not the club’s. From what I understand this is just the beginning of his career. He’s growing with Roma, playing his first consecutive minutes. Unlike last year, he’s now a regular part of our rotations and is undergoing a process of growth. He must focus on building his future instead of making rash decisions.”

“The Derby? If I had played the way Lazio did, the media would have killed me by now. I expect to see a reaction the same way we’ve done in the past after a loss. We’re a team of good guys who suffer after each loss. I expect a difficult match tomorrow but I also expect my players to give their best so that we can all go back to smiling.”

“Has our attitude changed since winning the Conference League? I think Mancini is doing better than last year. He’s much more balanced and controlled in his movements and decision-making. Ibanez, except for the episode in the derby, has been very good, too.”

“What I think makes the difference is that we lost three midfielders: Veretout, Mkhitaryan and Sergio Oliveira. We brought in Wijnaldum who hasn’t played a single game, which leaves us with two: Camara came on the last day of the transfer window and is now adapting step by step. Nemanja came in and found himself having to play alongside Cristante which wasn’t in our plans.”

“Unfortunately we’ve had many unexpected problems like last year when Spinazzola got hurt and we had to react and were forced to make decisions we didn’t intend to make in the beginning.”

“It sounds like I’m crying a lot but I don’t like to cry. I like to believe that these problems have opened the door for the likes of Volpato and Zalewski, Bove too. I can already tell you that Tahirovic will play and will start at some point, because he’s been training with us a lot lately and making great progress.”

“Atalanta, Napoli and Lazio: those are three games that we’ve played without our most creative player in Dybala resulting in three narrow losses. He was available with Juve and we got a draw. He played with Inter and we won. It’s difficult when our hard work and sacrifice in the transfer window goes up in smoke with Dybala and Wijnaldum being out.”

“Then we have a multifunctional player like Pellegrini who is another beam of light for us. But he plays too much, too often. He’s got muscle problems that tend to act up from time to time and he’s forced to play even when he’s not 100% fit.”

“Ultimately I’m not the one who makes the formation but the players with their characteristics.”

“What I see as an issue or as something we can improve is the acceptance of a different challenge compared to last year, the growth of our mentality, of responsibility and ambition. We can improve our attitude in not being satisfied with having reached our current level and wanting to go beyond.”