Kolarov talks his childhood, his move to Roma, and plenty more 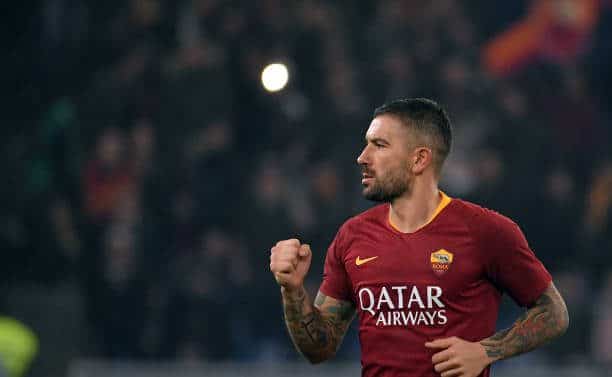 Roma left back Aleksandar Kolarov gave an extensive interview with the club’s official website. These are his words:

Let’s start at the beginning. What were you like as a child?
I was a child like any other. Coming from Serbia, there weren’t many opportunities at the time I was growing up. That’s why playing football was an obsession. Not only for me but for all my friends. After a while it became a dream for me. At a young age I was convinced that I would reach a high level.

When did you realise you could make a career out of football?
I’ve played the game since I was seven years old. When I was 17, I was at Cukaricki Stankom and transitioned from the youth team to the first team. That’s when I started playing seriously and the time came where I had to choose between carrying on with football or staying in school. I decided on the former, but I carried on my studies after that, as much as I could. That’s when I knew football was definitely going to be my future.

Is there a player you took inspiration from or admired particularly?
All my generation watched the great Red Star players, who won the European Cup in 1991. I adored Sinisa Mihajlovic – I took inspiration from him. To be honest, I’ve always admired attacking players and those with very good technical ability, rather than full-backs. I really liked Frank Lampard, with whom I got to play at Manchester City, and Steven Gerrard. Ronaldo was one of the Serie A players that was famous in Serbia. He was an idol for everyone. Also Paolo Maldini, because of the class he had. Then there’s Francesco Totti, particularly when Roma won the Scudetto.

Have you always played as a full-back?
No, I started off on the wing. I began playing as a full-back with the under-19 side. That’s why I wear the number 11 shirt. When I was younger, I also played as a midfielder, sometimes to the left of a midfield three. I had a powerful shot and it was something that made a difference at that level. The goalkeepers were short, so you just had to shoot high and hard to beat them.

Who taught you to take free-kicks?
It’s something that I’ve always liked, since I was a child. I’ve always had the necessary power, but free-kicks are something that you have to practice a lot. I do a lot of work on it and every now and again I score some nice goals. It’s the result of training.

What’s the best piece of advice you’ve been given?
You can say whatever you want to a youngster or to a man. Until you push yourself to the absolute limit, there are certain things you won’t learn. You need to realise things on your own. I believe in hard work and honesty. You need to turn up to training fully committed, with the necessary motivation and discipline. It’s not enough to get up in the morning and say: ‘I’m a footballer.  You need to think it constantly, even in the tougher moments, because that’s when you need to push yourself harder.

How old were you when war broke out in your country?
I was 14 years old when it all began in my country and I have very vivid memories of that period. After two or three days of fear, you unfortunately become resigned to the fact the war is here to stay and not going anywhere. You can do whatever you want, but ultimately its those above you who decide your fate. We tried to live a normal life. We didn’t go to school and for us that meant more time to play football. We played out on the street. At night you’d hear sirens and we’d seek refuge, because it was the signal that planes were departing from their bases. It got to a stage where the sirens didn’t even affect us and, after a month of war, we’d just carry on playing outside until midnight.

How much of a mark has that period left on your life?
It was an experience that made all the kids in my generation grow up quickly. We became adults earlier than we would have done.

Who is the person who most understands this time of your life?
My brother, Nikola. We were always playing football. Sometimes we’d even hurt ourselves. We loved one game; we’d start from opposite sides of a room, with the ball in the middle. We’d run into each other to see who would win the challenge and who was physically stronger. Once I broke his collarbone and he once broke my hand.

Sounds fun! Many people say you’re serious and moody. Do you want to deny this
There’s nothing to deny. I am serious. I’m the first to make jokes when the time is right, but there are times when you shouldn’t. I don’t like joking on the pitch. There are some training sessions when you have more of a laugh, but when it’s time to work, it’s time to work. I don’t like it when people don’t take training seriously – it really annoys me.

You’ll have a smile when you go home though?
I’m always laughing, expect for when I’m tense. That goes for everyone. There’s one thing I don’t like – when someone sees me on the street and is overly friendly with me, because I’m famous and I’m a footballer. I ask myself: do we know each other? It could be seen as a personal shortcoming, but that’s the way I am.

You seem to get a lot of emotion from football…
For me, when you train all week, there’s nothing better than getting a win. When the final whistle goes, I feel myself flying – I feel free. When we don’t win, however, I’m tense and can’t sleep. This is what we work towards. I’m always happy after a win, every time. For me, even winning against a third-tier team gives me an incredible feeling.

What’s the toughest ground you’ve played at?
There are many grounds with intense atmospheres. Anfield is very tough in that respect. Whenever you’re in a big game, you feel it. You don’t need the surroundings to tell you that. After a while, when you’re more experienced, you don’t feel the pressure of the fans as much.

Was playing in the Premier League a big dream for you as a kid?
I was 10 years old when I started watching English football on TV and I used to say to my mum: ‘I will go and play there one day.’ Then when I went to Manchester City, I called her and said: ‘You see I was right?’ She said I was crazy.

What does it mean to you to wear the Serbia shirt?
It’s something I’m proud of, as is the case for all players, from every country. I’ve made more than 80 appearances for the national team and I’m the captain, so I’m always certain to be in the squad. Even then I always feel proud when I get the call – I get the feeling every time. When I don’t feel that anymore, that’s when I’ll stop playing. It’s something I owe to my country. We don’t do it for money – we’re not paid. It’s something we’re proud of. As long as I keep getting that feeling, I’ll be there.

How many tattoos do you have?
I only have one, but it’s massive. I wanted to do it. Seven or eight years ago I called up my friend and we decided, while he was doing it, what to add. He asked me: ‘Do you like this?’, and then he’d insert a detail. It doesn’t have any particular meaning. I wouldn’t do it again, but now I have it.

When you came to Roma, a lot was said about your spell at Lazio. Then you scored on your league debut against Atalanta. What did you think after scoring that goal?
When I got the call from Roma, there was no doubt in my mind – I already knew about the importance of this stage and was aware of the potential issues. However, I knew that by working hard and doing my job, I wouldn’t struggle here. The free-kick I scored on my debut was a real boost for me. I never look back at the past. I know that some people on both sides weren’t happy to start with, given my past with Lazio. That’s part of football and the reality in this city. Everyone has their own opinion and is free to express it.

What advice would you give to a youngster that dreams of being a footballer?
To be honest with yourself. All parents want the best for their kids, but some go too far. I was lucky because my mother knew nothing about football and my dad didn’t play. I went on my own path. Nowadays, when a kid scores aged 10, the mum and dad are the first to say: ‘This one’s better than Totti and De Rossi.’ That’s wrong. If my son wants to become a footballer but hasn’t got what it takes, I’ll be the first to tell him he’s rubbish. You have to tell the truth. There are so many talented youngsters but at 15 or 16 haven’t yet become strong players, they still have lots of growing to do. You need to be honest with youngsters and they need to put the necessary work in. Let me give you an example; Nicolo Zaniolo is a lad with a bright future. I like the way he conducts himself – he’s serious and works hard. He has the right mentality. If I see him failing to keep his feet on the ground, I’ll be the first to clip his wings. It’s for his own good.

What about more established players? Edin Dzeko, for example. He’s had a great career but has been criticised in the past for some of his performance…
On him, I’ve already expressed my view. I wasn’t talking about Roma fans but in general. We could do with three or four players like Dzeko. He does his talking on the pitch. In football you have footballers and players. He’s a player.

Did you think the same thing when you hear opinions on new signings?
You always need balance, but we don’t have that in this city – we understand that. Yesterday Patrik Schick celebrated his birthday. Do you know how old he is? 23! He came here when he was 21. He’s young, so young. He’s a boy. Now he’s in good physical shape and we hope he scores lots of goals. You need time at that age. He’s not like me – I’m 32 and I’ve got experience. People can assess me differently. We’ve got lots of players like Schick in the team, that people didn’t rate before, but now they’re showing their best form and are very good players.

De Rossi is the captain of this team. What does a player like him bring, even when he’s on the sidelines?
He is vital. In my career, I’ve seen few players that are such big fans and so attached to the team in which they play. I give everything for Roma, but I can never say I am more Romanista than De Rossi. I’ve never seen someone so attached to the shirt. He is a fundamental presence in the dressing room, even when he’s not playing. Now he’s back on the field, you feel his impact right away.

Shall we do another one before the end of the season?
I didn’t mind this one, but we’ll see. I don’t know.