Lorenzo Pellegrini pens long reflection on his time at Roma 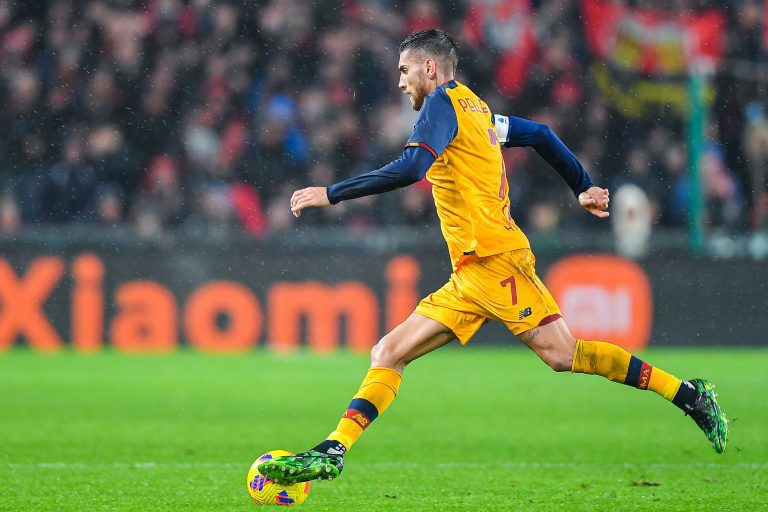 Roma midfielder Lorenzo Pellegrini penned a long reflection in The Players’ Tribune, where recounted his past as a young Giallorossi supporter to becoming the captain of the club.

Pellegrini, 25, inherited the captain’s armband of his hometown team this summer following the departure of striker Edin Dzeko. Although he’s currently out injured, the midfielder has transformed into the team’s most important figures both on and off the pitch.

“I was 16 years old when they noticed that there was something wrong with my heart. We were doing the medical checkups, as we did every July at the Roma academy,” he began.

“You always went in thinking it would take an hour or so, and then you could run back out on the pitch. We were young guys, you know? All energetic and healthy.”

“This time, though, I feared that something strange was going on. Over the last few weeks I had gotten tired very easily. I would walk up a set of stairs and be out of breath. It was not normal at all.”

“I ended up staying at the doctors’ office for three hours. They told me that I had too many irregular heartbeats. All of us have them occasionally, but mine were coming 20 times more often than normal.”

“It turned out I had some kind of arrhythmia. I asked the doctors what I could do. They said I had to stop playing for at least six to eight months, and then we would see.”

“So, no running, no training, no football. No Roma. It was so hard. There was nothing I could really do except for one thing: Listen to my heart. Literally, I would listen to it.”

“Every evening over the next few months, I tried to sense how often the irregular beats were coming along. I would sit in bed and make sure everything was completely silent, and then I would close my eyes and count the beats.”

“Thump … thump … thump.…I turned into my own doctor. Every day I did a checkup on myself. I spent four months waiting and hoping and praying that, somehow, the irregular beats would disappear. Then one day they were gone.”

“Just like that. I really didn’t expect it, since the doctors had said that I would need to rest for at least two more months. Had I gone crazy? Well, I didn’t think so, because I knew my heartbeat intimately now. I could tell. I knew.”

“The next day I listened again. No arrhythmia. The third day, still nothing. I could even climb the stairs without feeling like I had just scaled Mount Everest. So on the fourth day, I called my parents. I wanted to do another checkup.”

He continued, “We went to the doctors and they said, ‘You are fine.’ The same diagnosis as Dr. Pellegrini. The three sweetest words I had ever heard.”

“When I did my first training session, I was so motivated. I could have run around forever. I just wanted to fly into tackles and sprint into the box. Really, I could have invaded a small country on my own. The pain was over. I was back!”

“So what happens in my first match? I break my fifth metatarsal bone. I’m out for six weeks! Unbelievable.”

“To be honest, though, that was far easier to dea”l with than the arrhythmia. And anyway, those four months had given me some amazing things. I grew up a lot. I met Veronica, who is now my wife and the mother of my two children.”

“And I came out of it more convinced than ever that this was what I wanted to do. I mean, I had always been pretty dedicated. As a kid, when they gave me a toy car, I would put it on the floor and kick it.”

“And when I was in the Roma youth teams, I would play three games every weekend. But now I was determined to spend every minute of every day day trying to become a footballer. I didn’t ever want to think, “Damn, I could have tried harder. Cavolo, I could have given more.'”

;Adding, “I knew too well what life was like without football. Besides, I was playing for Roma. Do you understand what that means? Do you realise how big that is for a kid who grew up in Cinecittà? It’s not just a job, or a hobby, or a career.”

“For me, playing for Roma was everything. When I was five, I was already going to the Stadio Olimpico with my dad, where I would have to fight and argue my way past the other fans whenever I had to go to the bathroom. I had watched Totti play. I saw part of the Scudetto season under Fabio Capello.”

“When I put football boots on for the first time, I was dreaming of running out in front of the fans at the Stadio Olimpico. Then one day when I was eight, my dad told me that Roma had sent scouts to see me play. I thought he was joking, but then they asked me to do a trial.”

“I trained with their youngest team for five months, even though I was a year younger than everyone else. Since the pitches at Trigoria were being renovated, the sessions were held at Longarina, so it took me an hour to get there each way.”

“After school, I would wolf down some food and get changed in the car. When we got there, I would leap out and run straight onto the pitch. It was the best player entrance ever seen outside the Olimpico.

“Every day I would give it my all. Every day I would check the mailbox, hoping for the letter to arrive. You see, Roma would send letters to tell the kids whether they had been accepted or not. One day in July, I got mine. My dad told me to open it.”

“Did he know the content? Of course he did. But I didn’t, and when I saw what it said … it’s hard to explain. It was the day my life turned into a movie, where I was the main character and all these crazy dreams came true.”

“Of course, I had no idea about the journey I was about to take.”

The midfielder then recounted his ascension to Roma’s senior team in 2015 before he transferred to Sassuolo on a two-year loan spell.

“Once I stepped onto the pitch as a Roma player, well … the only way I can describe it is that, in those 23 minutes, I relived 10 years. Suddenly I was back in the stands at the Olimpico with my dad.”

“I was playing my third game of the weekend. I was sitting on my bed checking my heartbeat. I was listening to my parents as they took me along Via di Trigoria, telling me, half in jest, ‘How many times have we walked down this road?’”

“Well, a lot. I had been lacing up my boots dreaming of becoming a Roma player. Now I was running around in the famous shirt. What a beautiful thing. “

“I’m still very grateful to Rudi for giving me that chance. There was always a lot of gratitude and respect between us, and today we still have a great relationship. But at that time, it is true that I was not yet ready to play regularly for the first team.”

“When I came back, I was not only a lot more mature. I also felt this responsibility to live up to the greatness of Roma. The club, the city, the history … it demands so much of you. You have to organise your life around it. You need a certain conduct, a certain attitude. And if you don’t have that — ciao.”

“Right now we are working a lot on creating a winning mentality, because Mr. Mourinho always says that this has to be one of our greatest strengths. Of course, it doesn’t happen overnight, but I honestly believe that we are on the right path.”

“I know I have a big role in this process. I think a lot about how Francesco used to play. He was the kind of captain who never had to talk that much, because the way he played spoke so loudly. Although I’ll never want to compare myself directly to him — because, come on, nobody comes close — I want to replicate some of that.”

“But I also try to explain to everyone what Roma means. Every day, I tell my teammates what this club is — to the fans, to the city, to the people. It is not a talent factory.”

Finally, “It is not a stop on the way to a greater club, because there is no greater club. So what is it? The best way I can put it, is simply this: Roma is…Roma.”