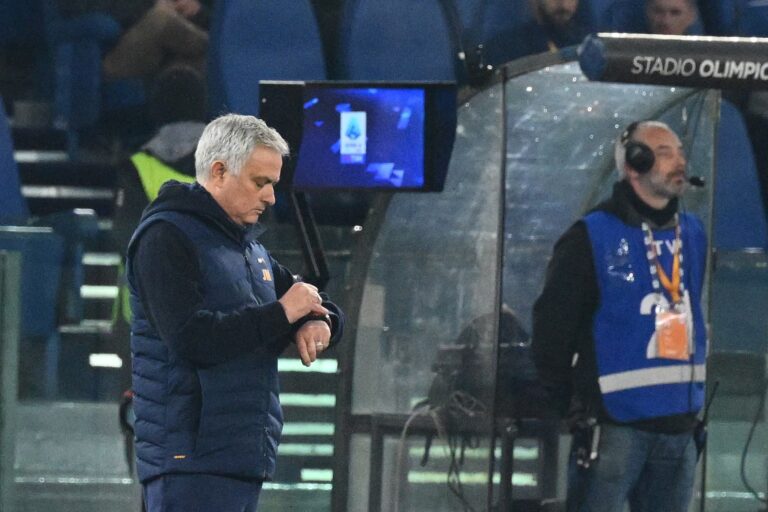 Roma manager Jose Mourinho sounded satisfied with his team’s effort in tonight’s win over Fiorentina. The Portuguese coach urged his players to be more daring in playing the ball forward, and praised Marash Kumbulla who made his first consecutive start this season.

“I’m terrified of red cards, and I don’t want to end up saying one word too many which could result in me getting a red,” he told DAZN after the game in reference to his unusually calm demeanor on the bench.

“The game was difficult. Fiorentina have good players, especially from a technical point of view. We defended well, we were always in control of the match.”

“I would like more quality in our playmaking, more people willing to play the ball forward. From a tactical point of view, I can only praise my players. But with the ball we must have more quality, more confidence. We have to play with what we have and give everything we have.”

“The transfer window? I don’t expect anyone else to come. [General Manager] Tiago Pinto was very honest, very direct: he said some words in an interview that usually a coach doesn’t like to hear, but they are honest words. They mean well.”

“Obviously all coaches want to hear that there is plenty of money to spend, and that we can buy a lot of players and build a very strong team. I have worked in such clubs in the past, but this is not the case here.”

“Here we work hard, we give everything we got. We concede very few goals, so we have chances to win.”

“Pinto? I have no problems with the General Manager. There is a great deal of honesty and respect in our rapport.”

“Many youngsters have done well so far, Zalewski, Bove and Volpato. But, Marash [Kumbulla] has given us two great performances recently and shown true professionalism despite not playing much.”

“I like Bove. I think of him as a sick dog, because he’s the kind of player who growls and never stops chasing his opponent.”

“Dybala initially asked to return on January 1st, but I told him I want you to return on December 29th because I am afraid this team may not win without you again Bologna. He called me on the 27th. He was on the flight to train on the 28th. He’s a special guy.”

“Tonight I liked Tammy’s depth and Matic’s game management, he is a player who loves the feel of the ball. Lorenzo [Pellegrini] also made a great effort to play, he got hurt three days ago and this morning I still didn’t know if he was capable of playing. I thank him for being there tonight.”

“How Roma can improve their playmaking? By giving the younger lads a chance. Tahirovic has this quality, he is an example of a player who can help us grow.”

“In the defense I think Kumbulla is the one who handles the ball better, but the real defensive animal now is Ibanez. He eats anything that stands in front of him. I don’t think the solution is to change the gameplan because there are many people who can’t play with a four-man defense. We can’t show our weaknesses, we have to hide them.”