Mourinho speaks ahead of Sassuolo: “My players like the way I work.” 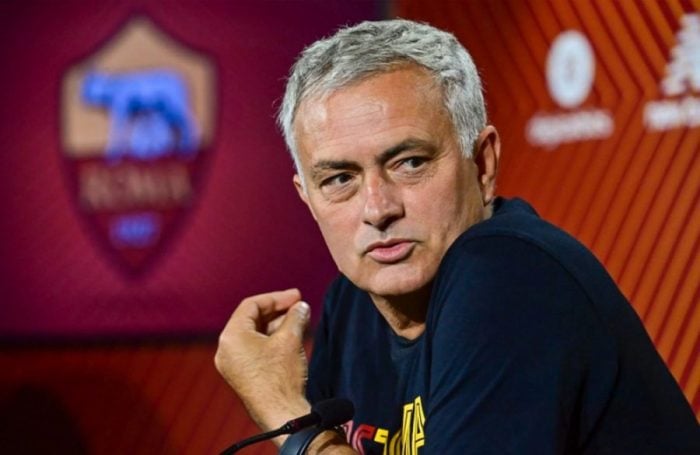 Jose Mourinho addressed the media ahead of Roma’s weekend fixture at the Mapei Stadium against Sassuolo. The Portuguese manager also spoke about the Giallorossi’s defeat to Inter in the Coppa Italia.

“Against Inter for 12 minutes we played a horrible game, then we deserved a lot more. We played very well. We could have conceded 2-3 goals and that’s a frustrating aspect. If you have the feeling that for 90 minutes you are not in a position to play, you come out with a feeling of defeat.”

“Instead, from the 12th minute onwards we were the team that could score. We could have scored 3 goals. Overall it’s a bad feeling because we did badly for 12 minutes, then great confidence boost because we played a good match. Tomorrow is another story.”

On the leaked locker-room ”outburst” that was reported by the press following Roma’s 0-2 loss at the San Siro:

“First of all, what you called an outburst has always been a principle of mine. That’s what stays there when we talk in the locker room. I am not going to tell you if we have spoken, what I said, I am not speaking to you at all. I am not even able to say that it is not true that I did not speak after the game. I’m not saying what I said though.”

“Has anyone been offended? It is a big lie, no one was offended. I thought you were referring to the stories that came out in the papers. That’s a big lie.”

“The players told me they really like the way I work with them. With me there are no secrets, what I say I say face-to-face. I give the player the possibility of dialogue. Everyone told me they don’t want me to change. And I told them I won’t change.”

“They told me “Good job coach, that’s what we want.” Do you think I shouldn’t criticize Ibanez, Karsdorp, Mancini or Smalling? I have to train them and they are happy with my methods. What came out are total lies. We lost a game, we worked on it. I spoke in the dressing room at San Siro, we analyzed everything and it’s working. No exclusions, all players are called up. The only one is Zaniolo who was excluded by the referee.”

On Pellegrini and Abraham’s status for tomorrow:

“They both need to find rhythm in their legs.”

On whether he’s satisfied with his team’s progress:

“No, I’m not. I’d like to go to the San Siro and win 2-1 after 45 minutes. I would like to see Zaniolo’s situation with Skriniar end in a goal. I’d like it at the start of the second half, instead of 2-0, 1-1 because we could have scored there and then. Obviously I’m not happy.”

“For me, finishing tenth or ninth is different. Finish fifth or sixth too. Finishing with 40 or 41 points is different. Each match means a lot to us. If you win it is a higher position, if you lose it lower.”

“When you get to the knockout stage in the Conference League, league matches help you. If you go to play in Rennes, Marseille, Leicester, if you start badly you are out. If you arrive that you play very well and then take two goals in the last 10 minutes you are out. You have to deal with the problems you have.”

“What happened in Sofia, one thing is going up 3-0 and another 3-2. We must work to improve. Some things cannot be improved because it has to do with the quality of the team, but we have to do better. I’m not happy, I expect more. If we make a mistake like we did in some games, we can also stay out.”