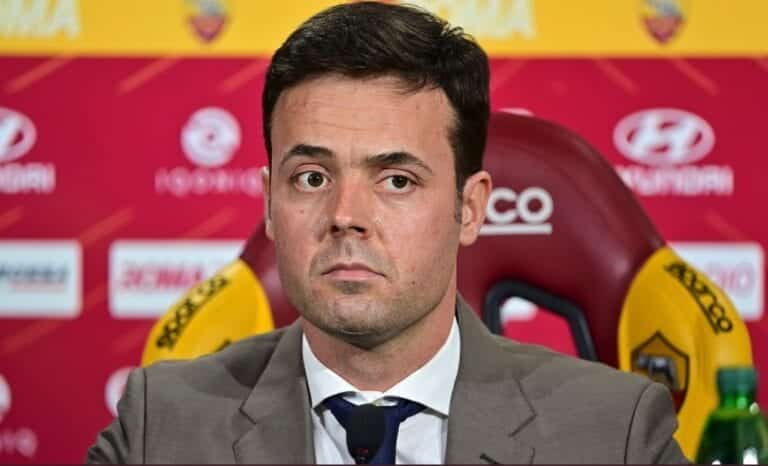 Roma General Director, Tiago Pinto, held a press conference today to field questions from the media and give an overview about the club’s January transfer market campaign.

The 36 year-old Pinto carried out his first transfer market for Roma since joining from Benfica earlier this month. The Giallorossi welcomed back Stephan El Shaarawy and acquired American defender Bryan Reynolds from FC Dallas.

He began, though, by discussing the situation of Edin Dzeko, who was linked with a move away from the club after a falling out with manager Paulo Fonseca.

“I apologise for the delay in answering this, I wasn’t trying to avoid the question. A lot has been said and written but it’s important that a football club has a similar dynamic to a family,” Pinto explained.

“When a family has an issue, you resolve it and you come out of the situation stronger. Dzeko is a great professional, a great footballer and a guy with a strong character. He has written important pages in the history of Roma. Over the last few days, we’ve met together in order to strengthen mutual trust. We came out happy and confident, now we must focus on the collective good of Roma, which is more important than the interest of individuals.”

He continued, “As far as the captaincy issue, I am convinced that a club must be based on discipline and rules must be respected, at this moment, Edin is not the captain of the team. Moving forward, we will all work for what is in the best interest of Roma — something that Edin will be a part of.”

As for the potential swap that would have involved Roma sending the Bosnian to Inter in exchange for Alexis Sanches, the Portuguese executive stated, “I’d like to echo the words of Marotta, who’s an experienced and talented executive. It’s true that I met with Ausilio — he was kind and we discussed various issues.”

“However, we never entered into a real negotiation.”

Addressing the club’s acquisitions this month, Pinto labeled El Shaarawy and Reynolds as “two important signings that can help the team become stronger between now and the rest of the season.”

He did, however, lament that he wasn’t able to finalise deals for some of the redundant players who aren’t in the plans of Fonseca.

“I worked to find solutions for players who don’t play much and aren’t happy. Unfortunately for one reason or another they did not materialise. From this point of view, I can’t be entirely satisfied with myself or the work I did this month.”

Attention then turned to the future of Fonseca, whose contract expires at the end of the season, as the club have been heavily linked with ex-Juve boss Max Allegri.

“First of all, I want to ensure that all the news that has circulated about meetings I supposedly had with other coaches are not true, they are lies and they never happened.”

“Dan, Ryan and I are satisfied with the work of Fonseca. My relationship with Paulo is very good. The coach is neither worried nor distracted by rumors and is only focused on Saturday’s match.”