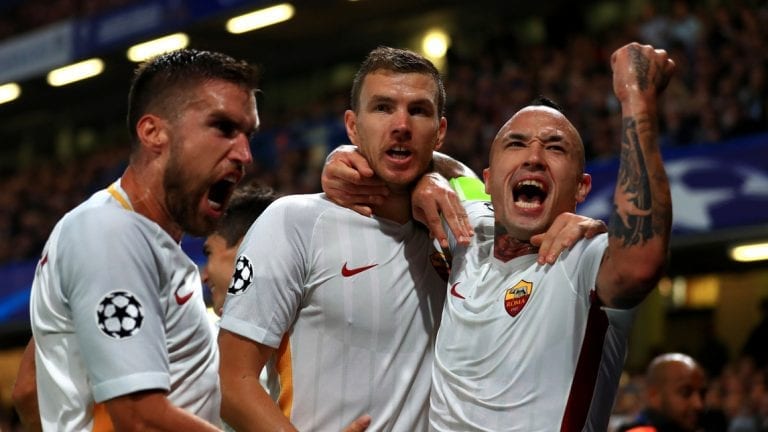 Many of Roma’s historical Champions League results read less like a football score and more like the final score of a set in tennis. Given that, as Roma’s pivotal European showdown with Chelsea on Wednesday approached, it seemed to be that the consensus amongst fans was hoping for Di Francesco’s men to not embarrass the shirt, never mind getting a result.

Fast forward to after the match, and I was still at a loss for words. What we witnessed from Roma was arguably one of the strongest performances we’ve seen from this club in Europe in nearly a decade. The “typical” Roma that is usually on display in Europe went to the wayside, at least for one night.

Recent history in Europe has not been kind to Roma. While it’s easy to blame former manager Rudi Garcia for the most recent toothless European displays, the club hasn’t exactly shrouded itself in glory even before the Frenchman arrived in the summer of 2013. But given where the Giallorossi were when they found themselves embarrassed at home against Bayern only a few years ago to today, calling it a “step forward” would be an understatement.

The Roma that was at Stamford Bridge on Wednesday evening took everyone by surprise. Fans, media, neutrals…everybody seemed shocked by the performance that was put forth against the reigning English champions. It wasn’t the indecisive, spineless, or timid display many are used to seeing from Roma in Europe. Instead, it was a concentrated Roma, one who were concrete, decisive, and, dare I say…brave.

From the second the opening whistle sounded, the Giallorossi showed that they were at Stamford Bridge to play and weren’t willing to settle, echoing the sentiments of Eusebio Di Francesco in his pre-match press conference. Down 2-0, rather than attempting to “stop the bleeding”, Roma kept playing. The Giallorossi pushed the pace, they held possession, they weren’t lazy or careless, they were decisive in their movements and they pushed the issue to try and put the Blues in trouble. They played with personality, character, and grit, which is just about everything any fan or journalist could ask for from this team.

After Aleksandar Kolarov, who put on another masterclass display and is probably one of the best summer purchases of any Italian club, pulled one back to make it 2-1 at half-time, Di Francesco had his team coming out roaring in the second half as the former Sassuolo manager put Conte in heaps of trouble.

As Edin Dzeko evened the score line with a world class finish, Di Francesco continued to have his men up the tempo as he did not appear content with a draw, a refreshing mentality to have at the club. Once the Bosnian got his brace and put Roma ahead 3-2, it appeared the Giallorossi were ready to achieve the impossible before Eden Hazard punished Juan Jesus, who had a nightmare performance, to even matters for good.

While Roma were certainly the better team on the night and many will be disappointed in the Giallorossi not being able to clasp the victory, the performance at Stamford Bridge was simply incredible. Take away the putrid displays and individuals errors of Juan Jesus and Bruno Peres, then who knows how this match could have ended. While it may have been a one-off performance, it doesn’t matter. When Roma’s Champions League draw was revealed, I deemed it “nearly impossible” for the Giallorossi to advance. I called for Roma to play for the third place and settle for Europa League football. But they’re not doing. Roma aren’t settling. They’re allowing us to dream, they’re giving themselves a chance, which is all we can ask for.

Though, Roma may ultimately not advance to the knockout stages of the competition, they’re doing everything that is being asked of them. They’re playing, they’re giving their all for the shirt, and most of all…they’re believing.