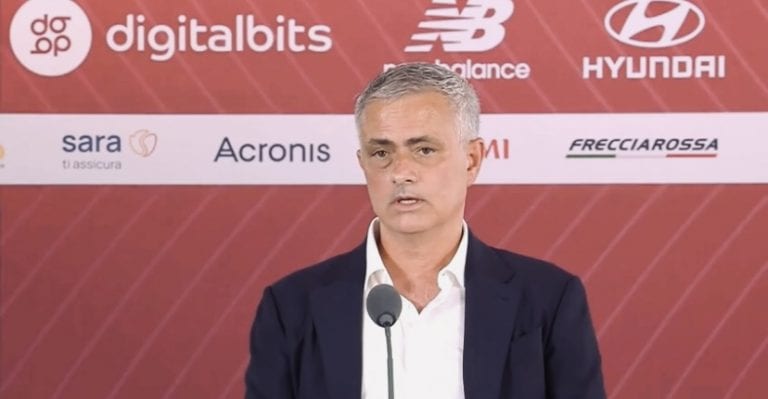 Two months since being appointed, Roma manager, José Mourinho, held his first press in the Italian capital early this afternoon.

‘The Special One’ was hired by Roma’s new ownership, Dan and Ryan Friedkin, in early May to replace Paulo Fonseca, whose contract was not renewed by the club.

With Roma General Director and compatriot Tiago Pinto alongside him, Mourinho discussed the what led him to ultimately join the Giallorossi and return to Italy for the first time in a decade.

Before beginning, though, Pinto began the press conference by thanking the club’s ownership group — who turned the dream of Mourinho into reality.

“Hello everyone, my Italian still isn’t perfect yet but I’m going to try. Today is a very happy day for us, it is the first step for a change of mentality,” he said.

“We expect good things in the next few years. I don’t think you expect me to give an introduction on Mou because his career speaks for itself. I thank Dan and Ryan for the opportunity to bring him to Roma, and I thank Mou for coming here. I can tell the supporters that the energy in Trigoria was high and we are happy to have Roma grow with Mourinho.”

Stepping up to the microphone, Mourinho began his opening remarks. “Right away I feel indebted because of the welcome I received, I haven’t done anything yet but I must say thank you to the supporters,” he said.

“I also have to thank Dan and Ryan Friedkin. The way I’ve been welcomed here has made an impression on me. Now — I predict receiving this question so I’ll answer: why am I here?”

“Since I’m by the status of Marcus Aurelius, I’ll say this – nothing comes from nothing: the legacy of this club. Never forgetting the past but building towards a future. The word ‘time’ doesn’t usually exist in football, but here it does. The owners wants to do something here with a lot of passion, which is the primary reason I’m here.”

“Now it’s time to get to work. As soon as I arrived at Trigoria, the concept of ‘mine’ changed entirely because of everyone who wants to work with us and be a part of this club. The city isn’t the reason I’m here – this isn’t a holiday. But the incredible link between this club and the city is obvious: the crest, the colors, the name — sometimes the city and club get confused and this is a symptom of it.”

“The passion for football in this city is immense. I’ve already had to change my mobile number three times because you guys always discover it, it’s incredible,” joked Mourinho.

“But seriously, even for somebody who has worked in Italy before – you’re impacted by how much football means here. You miss it. You miss being in a place that talks and lives football for 24 hours a day, you really, really miss it.”

“As for the media, though, you guys know that I’m not a very nice person when I’m working. I’ll always defend the club and prefer some things remain internal, so maybe this won’t be such a great time for you guys (laughs).”

When asked about the need to change the club’s mentality to get on a winning path, Mourinho was stern in his messaging to his players.

“I’ve got to get to know the team first because the group can’t change before you’re aware of what you have. Obviously, though, there are fundamental principles that are non-negotiable. Today is the first day of training and the players have to understand how we work, which is simple: anything less than 100% isn’t good enough,” he stated.

“You’re asking about players, but I’m talking about the club as a whole. I had the chance to speak to a lot of people at Trigoria since I’ve been in quarantine and the massive amount of huge everyone has to work together towards winning is incredible.”

The 58 year-old was then asked about how Serie A is viewed abroad and if the league is still considered among the elite of football.

“When we talk about the Italian league, we’re talking about a nation that’s in the European final. Most of the players within the national team play in Serie A, so if the league is not viewed abroad as one of the primary championships in European football – then it’s our responsibility to do more.”

He added, “I’m not only representing Roma, but also indirectly Italian football. If there’s more we can do, then we’ll do it.”

‘The Special One’ then addressed his roster and what he views are his team’s needs in this summer’s transfer market.

“First off, let me begin my saying how happy we are to have players in the Italian national team, who are having a veyr good European campaign,” he answered.

“Cristante is a player with a lot of personality and I’m waiting for him here with open arms. Spinazzola is incredible because he came here to Trigoria immediately after his surgery with a smile on his face. It’s a tough situation both for him and us. We have a young player in Riccardo Calafiori, who will be with the first time but must work hard.”

Tiago Pinto then interjected to address the transfer market after Mourinho was asked about the club’s previous financial issues, which could limit their summer spending.

He explained, “I was expecting this question. We’ve already analysed the team and what we need. We’re working every day towards finding solutions, but certainly at the end of the day, we will have a team that’s worthy of a manager like Mourinho.”

Asked about the narrative that he’s no longer considered a top manager, Mourinho answered in his classical manner, dismissing the notion.

“My last three clubs, Chelsea, Manchester United, and Tottenham, I won a league title, three cups, and took a team to another final. What’s a disaster for me are things that some have never done this in their entire lives.”

“But I don’t want this to be Mourinho’s Roma, I want this to be the Roma of the Romanisti, which I am one of. No more, no less. If you want, you can talk about the Juve of Max, the Napoli of Spalletti, or the Lazio of Sarri, but I don’t like the label of ‘the Roma of Mourinho’. There’s a lot of work that needs to be done here, but there’s one thing we can’t escape – this team finished 29 points behind the league winner and 16 points behind fourth place.”

“The word ‘time’ was one of the key words that I heard when I met with the owners. This is the key to our project here, but obviously if we can speed things up that’s even better. It’s too easy to discuss titles, that’s what you’re talking about. But here internally, we’re discussing a project, working, improving, and getting better. The titles will come.”

Mourinho also took a jab at his former club, Inter, when asked if he’s disappointed that he won’t be facing Antonio Conte.

‘The Special One’ took aim at the Nerazzurri’s financial difficulties and dismissed the idea that should be held in high regard within the club’s history.

“The owners here don’t want isolated success. It’s more difficult when you push for sustained success because it’s easier to win in isolation. It’s even easier if you win and you don’t pay the players their wages.”

Adding, “Conte? There’s certain coaches in club’s histories that you should never make a comparison to. Here in Rome, for example, don’t compare anyone to Liedholm or Capello. When you discuss Inter, no one can be compared to me or Herrera.”