Spalletti vs. Totti: No Winners, One Loser…Roma 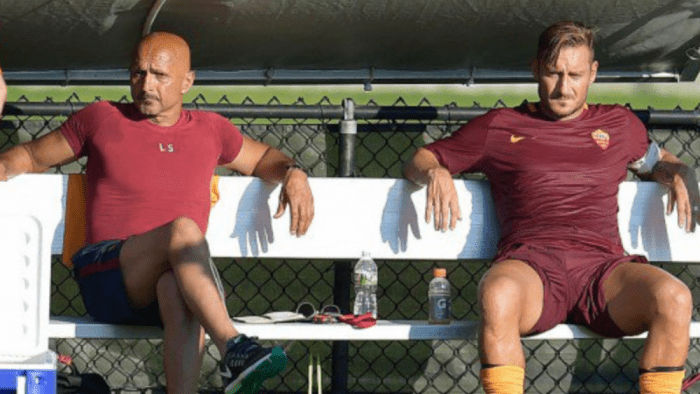 Civil war is always ugly. Throughout history we’ve seen several examples of civil wars and the chaos, devastation, and destruction they can cause. Seeing members of the same group, family, etc. being pitted against each other in an internal struggle almost always ends in ruins…in some form or another.

On a significantly smaller and, obviously, less horrific scale, we see a potentially damaging and chaotic internal struggle developing in the house of Roma: Spalletti versus Totti, Totti versus Spalletti, a clashing of the club’s manager and the club’s legendary talisman. Who will prevail? Well here’s the short answer…nobody, everyone loses.

This past weekend saw the latest chapter written in the Francesco Totti book of “Will He or Won’t He Quit”. And while you certainly hope this saga will be a mere footnote in what is a long and storied career, one can’t help but feel that both sides have completely bumbled this entire matter. It should be less about whose side you’re on and more about honoring and paying the appropriate homage to one of the greatest footballer’s we’ve ever witnessed.

To understand where this entire saga went wrong, you have to rewind all the way to last February and that disaster of an interview Totti gave to Rai. That’s right. The interview where Roma’s captain went on camera and stated, “Spalletti? We barely speak, it’s only ‘Good morning’ and ‘Good evening’.” In the same interview, Totti went on to further criticise Spalletti due to his lack of playing time and stated that, at 39 years old, he still felt like a footballer with a lot more to give.

From here, we’ve seen Totti perform brilliantly in the latter part of the 2015/2016 season and certainly look like he has enough left to warrant a role within Spalletti’s team. It’s been a different story this season, though. Totti has been hampered by injuries and, when given the few chances he’s been afforded, hasn’t made nearly the same impact he had last season. So it’s certainly appropriate that both Spalletti and the club feel that now is the best time to cut the cord and finally move on from Totti. I don’t think many would disagree with this, either. It’s certainly appears that now is the appropriate time for Totti to hang up his boots and take his new role as a director at the club.

Just because, though, that nearly everyone seems to agree it’s time for Totti to quit, it doesn’t mean things have to end in the ugly manner that we’re currently witnessing. Just in the last week, we’ve seen both Monchi and Umberto Gandini confirm that Totti is set to quit this summer while reiterating the terms of his contract, which ends on 30 June and calls for the player to remain at the club as a director. It’s certainly appropriate for the club to address the matter, but it appears most fans are irked by the fact that Totti’s future is being addressed by everyone except Totti.

So instead of the incessant speculation, the club would be wise to get Totti in front of the media and let the words come from his mouth. It’s no secret that Totti has a massive ego and perhaps this constant speculation and questioning on his future is a way for him to stroke his ego. Regardless, the club have backed Luciano Spalletti into a corner and he’s absolutely right when he says that he’s damned if he does or doesn’t when it comes to matters regarding Totti. This situation is fair to neither Totti nor Spalletti, and it’s especially unfair to the fans.