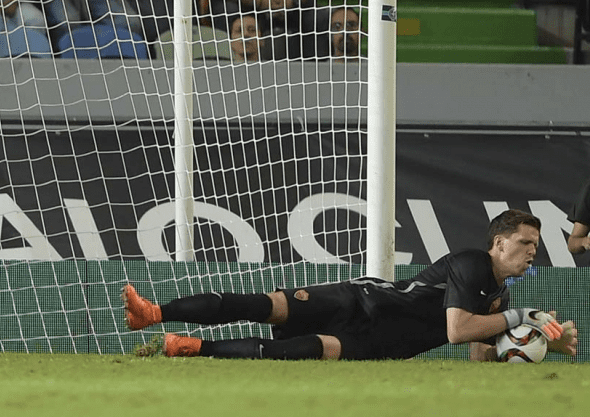 Roma goalkeeper Wojciech Szczesny spoke in a lengthy interview today to FourFourTwo, here are his words:

You spent your entire professional career with Arsenal before moving to Roma on loan. Was it a big challenge for you or a refreshing change?
It was a challenge, because after spending so many years in London I’ve grown attached to it. I have an apartment there and most of my friends are there so it was tough at the beginning. But I’m not a kid and certainly don’t act like one, so I also took is as a great opportunity to develop and learn something. After a difficult last season it was a chance for a fresh start – I definitely needed to rebuild my career. I also went to Rome to become a better goalkeeper, so that when I go back to Arsenal, I can compete for the number one jersey and win it back.

You were quoted by media at the end of April saying that you hope to ‘stay in Rome for longer’. Is that your goal?
I didn’t mean it as a permanent transfer, but another one-year loan – sure. That would be probably the best option for both sides. I’m not sure if that’s what the clubs are discussing at the moment, but it makes perfect sense. I definitely like to be on the pitch every week, have that continuity of games played throughout the season. Roma is a good fit for me.

Is the life of a keeper much different in Serie A compared to the Premier League?
It is. In some aspects it’s easier, but it’s also difficult from a different standpoint. It’s easier to play in front of the goal as keepers are practically untouchable and protected in that area. When you go to get the ball any knock or push on you is called a foul, so it’s easier to make that decision.
Serie A is more difficult by being more tactical. There is more pressure on every player to execute a tactical plan. That also includes the keeper and how he needs to direct his defensive formation, keeping them organised in a specific way. For me it’s a very positive change, because it has helped me grow and learn a lot. I’m definitely a more versatile and complete player then I was a year ago.

Do you fancy Rome as your new town?
The weather is much better here and people seem to smile a lot more. But London is London – it’s my town and I will always love it.
It looks like you’ll finish second or third in the league and you made it to the last 16 of the Champions League.

Would you call this season a success for your club?
I would say it’s justified and a fair result. Not great, but also not bad. We weren’t ready for the championship title yet. With Juventus winning 24 out of their last 25 games, it’s hard to compete with that. In that perspective we’ve hardly have a chance. I believe we have very good organisation within the club and a strong enough squad to compete next year. There’s definitely ambition among the Roma players to try to win it all.

Why didn’t it work out for Arsenal again?
I felt like this was the season for Arsenal to win it, but we’ve drawn too many games which we should’ve won. Losing against Swansea at home was a tough blow. There is quality within the team – we’ve had some of the best players in the league in their positions.

Also Petr Cech was a great buy for Arsenal, he’s strengthened the squad. They didn’t play bad football, they just lacked consistency and focus in certain moments which proved costly.
Let’s not forget – it’s a big club which always plays in the Champions League and finishes in the top four. They’re not a failure, far from it. And I’m pretty sure Arsenal will win the league soon. You’ll soon go to Euro 2016 with Poland and many see you as a dark horse.

Do you feel this is the best Poland squad in many years?
I do believe in this team, but I want to put the brakes on for a minute. We all remember the pressure from Euro 2012 and how it all ended, so we want to take it easy. I’m sure we will be prepared. Our coach Adam Nawalka and his staff are very good at scouting and analysing each and every opponent. When we go onto the pitch we know everything about who we’re playing against. So I’m sure we’ll be ready for the challenge when the time comes.

Why didn’t things work out four years ago?
Because of too much hype and too much talk, which built pressure. It got to us and in the end we didn’t win a single game. It was a nightmare experience for the team and for me personally. We failed big time. That’s why we have a completely different mindset now. Players should think about their next pass, tackle and what’s happening on the pitch within the next 10 seconds.
Not if we’ll advance to the quarter-finals or further, or if a club from a bigger league will buy them. We didn’t achieve anything at Euro 2012.