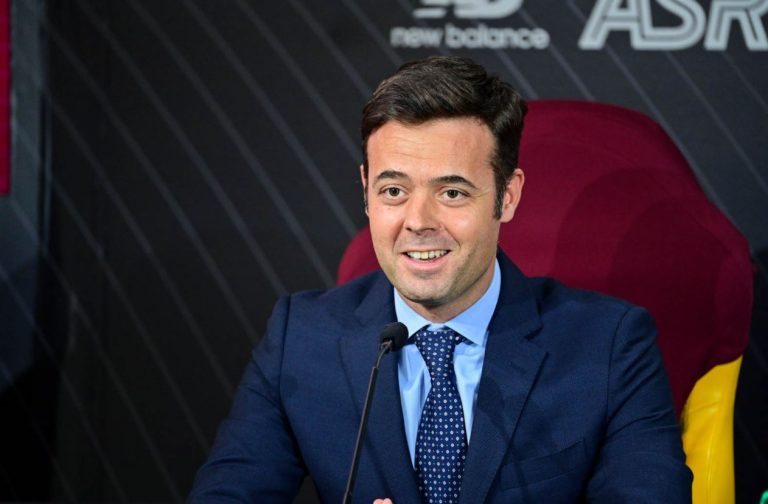 General Manager Tiago Pinto addressed the media at a press conference at Trigoria. The GM took his opportunity to discuss Roma’s transfer window.

“It is important for me today to explain the strategy and what happened during the market. But first of all I wanted to thank the owners for the work done during these months and for the constant presence in every decision, for me this is the only way to do the best for Roma.”

“I think we managed to make a good transfer market, I’m not here to say that I’m a great director but in this context we managed to bring the best coach in the world and we managed to improve the team, sure, you will talk about the things that failed but I’m sure of the excellent work done.”

What is missing from the midfield?

“I think it’s funny because the market is closed but the questions about the midfielder continue. It is not a budget problem, the market is dynamic, moments must be understood, in a moment we had the desire to accelerate the progress of growth.”

“You all know about Xhaka and that it did not go well, as I said the market is dynamic and we wanted to do what was most urgent. We had 60 players under contract when I arrived, we had to take this situation into account to make the transfer market.”

Are you happy with the players you managed to off-load? Can the players that have been excluded from the team be reintegrated?

“It’s true: a good sporting director is someone who is good at selling rather than buying. Finding solutions for more than 30 players I think is a good job. Surely there are better directors than me but I will learn.”

“There are 3-4 market windows open, I think solutions can be found for the remaining players excluded from the team. We worked a lot and brought them good offers where no player would have lost any money, but all offers were rejected.”

Can Roma fight for the scudetto? Would you consider missing out on CL football a failure?

” My vision is not the Scudetto, but every day to work to narrow the gap between Roma and success.”

“We want to win: we have the strongest manager in the world and a stronger team and many other changes. We must have the mentality of winning all the games, then we will see where we are in May.”

“The Champions League is the main goal. I work every day to shorten the distance between Roma and success. Everything we have done so far brings us closer to success. I am not thinking about the Scudetto in May, but it is clear that we want to win.”

Do you have any regrets from this transfer window?

“The transfer market is very dynamic as I said, the moment we couldn’t bring in Xhaka… nobody likes to be rejected, he wanted to come, Arsenal didn’t want to sell, it was a regret there and then. The real regret was the non-placement of some of the players excluded from our plans, a situation that I don’t like, I worked a lot with Morgan to present worthy offers for these players.”

Is Mourinho a burden or a motivation for a sporting director?

“Aside from some reports that say I didn’t get Mourinho, I am very proud to have brought him here.”

“I’m Portuguese, I’m 36, Mourinho has a stratospheric dimension for me. I take advantage every day to learn from him and from the fact that he has won everything and worked in the best clubs in the world, I don’t feel pressure to be close to him, on the contrary we have always worked together evaluating the team together, we know what we can and what we cannot do.”

“Regarding his words on the Roma bench, not only does he say that lack of experience is normal, I think so too. In this project we have always said that there would be room to develop the players. I am happy and motivated to work with him every day.”

How do you go from trying to bring in Xhaka to not getting a midfielder? Any ideas for January?

“On Xhaka I already gave a reply, the market is dynamic. However, it is important to say that Roma have an important midfield.”

“Cristante a champion of Europe, Veretout the best midfielder by number of goals in Europe, Villar, Diawara, Bove, Darboe. You know we wanted to take Xhaka but we have to respect our players. Victory does not only depend on the market but also making the team grow, in January I will be ready to analyze and act if needed.”

“We have a network of 40-50 people ready to develop the players, if it is only about the transfer market, Lille would not have won last season.”

If Dzeko and Spinazzola did not require replacements, would you have acted differently?

“I look from the problem to the opportunity. I’m sorry for Spinazzola who was motivated and played very well, we took Vina and we solved a problem, we will have 3 really strong full backs.”

“Dzeko was seen as a big problem while I wanted to see the opportunity to accelerate our project and I took Abraham, the market is dynamic.”

Is the choice to exclude some players a firm decision taken by the club?

“I have to respect the decisions, but I also say that as sporting director it is not easy to find 5-6 offers that I think are right that do not harm the players and then see them reject them time and time again.”

“Starting the season and having 60 players signed on was difficult. Even for Mourinho it would have been difficult to manage so many players. We made this choice to reduce the group and create this environment, a compact and cohesive team united and willing to fight.”

“This environment is unassailable, it does not change. I am here to take on my responsibilities and 95% of the players have made a great effort to find accommodation. In the end we are all free humans who make decisions. I don’t want to name names but I have heard important players who made an effort by leaving and going to another country to play, these types of players I will always remember.”

When will Spinazzola and Smalling return?

“Spinazzola is more complicated I can’t talk about it I know he has a great desire and we have to stop him. Smalling should be available against Sassuolo.”

Do you think there is a risk in sending players like Florenzi, Pedro and Dzeko to direct rivals?

“In this life any decision in a risk, let’s think of Messi…”

“These players had 3 different situations but when a player does not want to play for Roma and wants to leave is what counts.”

“We want to build a project where the star players of the team are willing to die for Roma.”

“If we look at the transfer market: Ronaldo, Messi, Griezmann, Roma did nothing different from what the others did, perhaps we communicated worse because I always told the truth, we talked about wages and choices to be made. Last year we had Dzeko and Mayoral, now Abraham, Shomurodov and Mayoral, we can’t be worse off.”

What grade would you give yourself for this window?

“Thinking about those who said I would not make any moves, I would give myself an 8.”

“Thinking about the fact that this was one of the most complex markets in history, I would give myself more. But, keeping my feet on the ground a 7.5 feels right.”