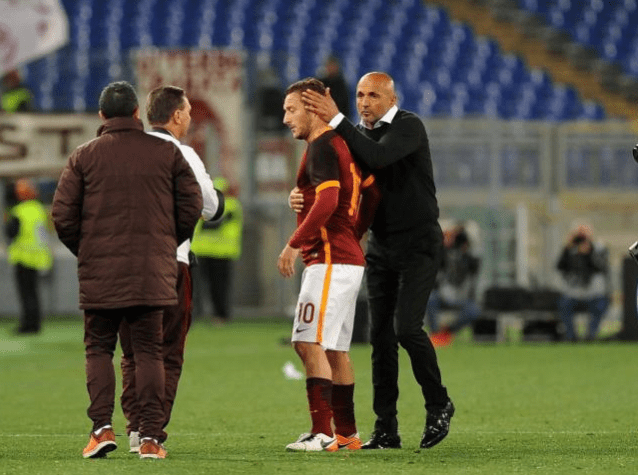 At midnight today, Totti’s new autobiography “Un Capitano” was released and made for sale to the public. In the book, Totti touches upon his contentious relationship with former manager Luciano Spalletti.

The first confrontation he mentions happens in the dressing room after a match against Atalanta, where the former captain scored a goal:

Spalletti: “Enough, you have broken my balls, you pretend to lead but instead you should leave, you play cards despite my bans, I’m finished with you”!

The pair then almost came to blows before the other players in the dressing room intervened and stopped it.

The second confrontation Totti discusses comes after the infamous interview to Rai, where the captain demanded more respect and insisted he still felt like an important player. This is the dialogue Totti mentions:

Spalletti: “What should I do now?”

Totti: “Mister did you hear the interview? Look, Vito has it recorded”.

Spalletti: “I do not care about the interview, what matters is what is written here in the newspapers”.

Totti: “Look, I’ve only spoken well about you, it’s the club that I’ve asked for more respect”.

Totti: “Very well, I accept your punishment. We’ll see if it’s me or you who pays the consequences”.

Spalletti: “Are you threatening me?”.

Totti: “You know that in Rome, people are on my side. I only spoke well of you, yet you want to drive me away. Take responsibility”.

Spalletti: “You are now like the others, forgotten when you were irreplaceable”.

Totti: “Coward, so now that you do not need me anymore you break my balls, eh? You came back here on a mission, get it done!”