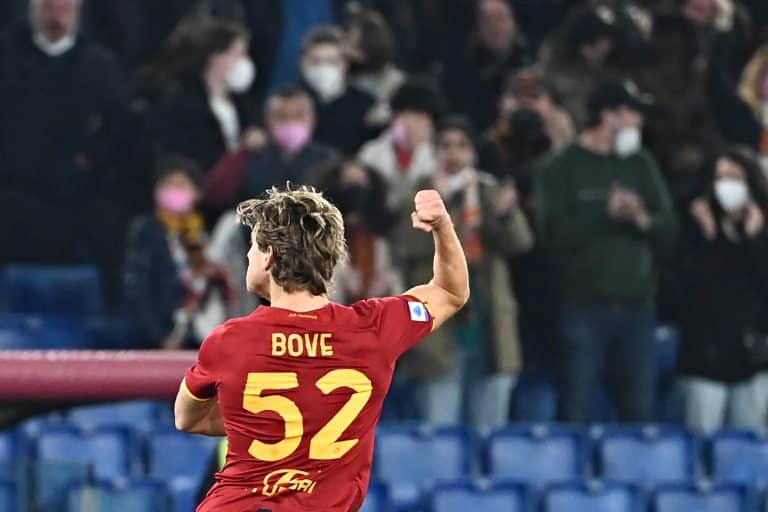 Edoardo Bove was able to impress everyone in Roma’s second-half comeback against Hellas Verona on Saturday with a beautiful strike from a difficult angle that marked his debut goal with the first team.

His agent, Diego Tavano, spoke to Teleradiostereo about his client’s incredible past 48 hours.

“He’s a a calm and mature boy who is now in the first team and rightly so. He has always been ready even in the few occasions previously granted to him.”

“He knows what he can bring to the table and always tries to give his best for the group that values ​​him very much.”

“After the goal against Verona he didn’t celebrate too much because he told me there was no time to waste, we had to try and go for the win.”

When asked what Bove’s ideal position on the pitch is, Tavano answered, “I would say a attacking midfielder or mezz’ala.”

“He is now a complete footballer who can play several positions in the middle of the pitch. In the youth sector he has always scored many goals.”

“He went into pre-season with the first team on Tiago Pinto’s recommendation who understood the need to have a greater number of players available.”

“They made him go anyway despite his arm injury. He made himself available and went anyway.”

“Plenty of teams in Serie A were in the race for him but Mourinho and the management stopped everything. They wanted to keep him and help him grow.”

“With Mourinho Edoardo has grown a lot. He matured and is now more complete. When they told me a decision had been made that he would stay at Roma, I was very happy.”

“He renewed his contract recently and we are happy. Roma will include him in their project, which is very nice.”