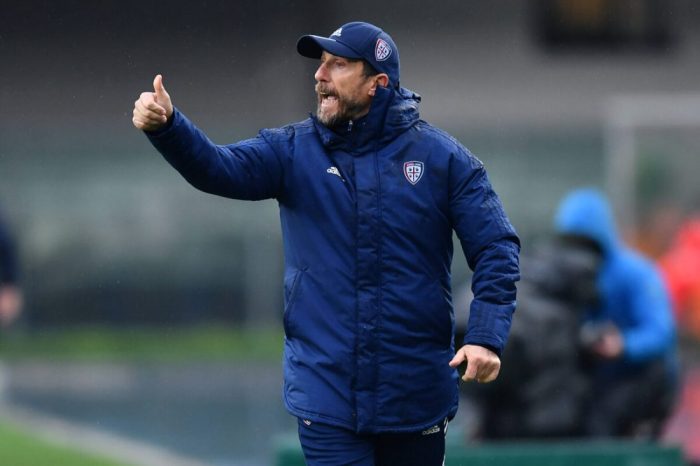 Former Roma and current Cagliari manager, Eusebio Di Francesco, was calm today as he prepares to face his ex-club tomorrow in the Italian capital.

The 51 year-old, who spent nearly eight years with the Giallorossi between his playing and managerial career, was appointed as the new manager of the Isolani in August following spells with Roma and Sampdoria.

Di Francesco was sacked by the Giallorossi in March of 2019 after a string of poor results, less than one year after he led the club to the Champions League semifinals.

“This match presents a lot of pressure for us, but it’s something I’m used to,” Di Francesco stated during his pre-match press conference.

“Obviously I’m returning to a place that has given me so much and I’m disappointed that there won’t be any supporters at the stadium. Beyond the Champions League semifinal, it’s nice to remember my entire time there, which includes launching Nicolo Zaniolo at the Bernabeu.”

He continued, “I don’t have nearly enough time to get into everything, but we’ll enter this match calmly. It’s going to be essential that the right guys are chosen because Roma is a superior team to us on paper. We have to play a great match in order to get anything out of this.”

Di Francesco then discussed his options for tomorrow’s fixture as Cagliari remains in search of their first win since the 7th of November.

“I like the two striking options I have in Simeone and Pavoletti. They’re different but both of them have a chance at playing tomorrow so I’m glad to have both of them.”

“Godin will be able to play while Walukiewicz trained separately yesterday. We recovered Tripaldelli, while Faragò and Klavan will be out. Ounas, though, probably will be called-up.”