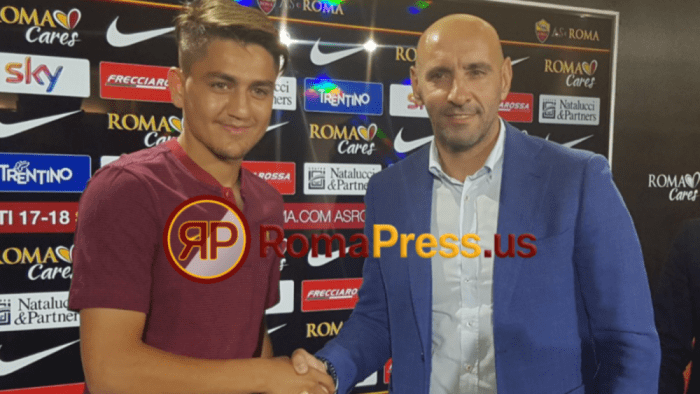 Monchi begins: “Perhaps among the players that arrived this summer, Ünder is the least known one, but for me, it was an important challenge to bring him here because he was courted by big clubs and it’s an honor to have him here. I thank the President for trusting me to buy this player. He is an important player for the present and the future.”

(To Under) What attracts you and what worries you the most about Italian football?
I come from a league that is sort of like the Italian one, you have to be strong in the attacking and defensive phases. When this opportunity arrived, I immediately accepted it, I am very happy and I will adapt to this strong football, I will not have any problems.

(To Ünder) What is your first impression on your new teammates?
When I arrived it was my birthday, at the airport, they greeted me very nicely and I really enjoyed that. Not yet speaking Italian creates a bit of discomfort but I’m already taking lessons and I think I can learn it soon, as quickly as possible.

(To Monchi) Was it a long negotiation to buy Cengiz?
In football, there is less and less time (for development), but we have great confidence in him. Beyond his sporting qualities, the human qualities must also be intertwined. He’s an intelligent boy and we’re sure the time for him to settle will be short. There was competition mostly from England from top-level clubs, but fortunately, Roma is a brand that attracts many.

(To Ünder) Do you feel ready to be a starter? What do you think when they call you the ‘Turkish Dybala’?
I feel very ready, I think I have shown that I was ready when I was playing in Turkey. I scored 7 goals and I showed my qualities. For the moment, I feel very ready and then we will see down the road, we also had a good time in America, where I scored a goal. From the beginning, I feel ready and then we will see together. Even in Turkey they called me Dybala, but I’m Cengiz and you’ll remember me as such.

(To Ünder) Did you meet Totti, what was said? What do you think that you arrived in the season after the greatest player in Roma’s history quits?
I met him on the second day I was here. I have seen him at least 10 times after, I have seen a lot of his videos and talked about him, I’m sorry he left football, I wanted so much to play with him so I could learn a lot from him, a shame.

(To Monchi) For Emre Mor, are the rumors concrete?
Yesterday I was asked the same question, today I will try to not go back to this topic, I can say he is interesting but we do not care about particular interest, for a Turk we have Ünder.