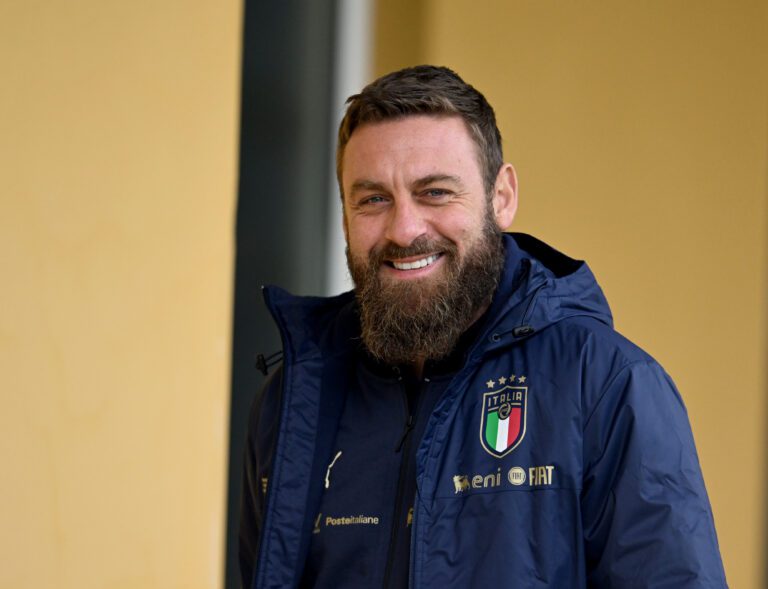 The 39 year-old detailed his role with the Azzurri and discussed his managerial aspirations following his retirement from playing in January of 2021.

“When it comes to when I’ll be on the bench (as a head coach), I’m in a waiting phased. It could’ve happened in June and even a few weeks ago, perhaps it’ll happen soon,” revealed De Rossi.

“Right now my mind is focused on the national team. For me, it’s like a family, a home, and I feel really good when I’m here. Of course we have a clear agreement if something were to happen but right now I want to honor my role here.”

As he waits for his first appointment as manager, De Rossi cited a number of individuals he’s drawn inspiration from.

He said, “A guy like De Zerbi honors the philosophy of us Italians in the best way. I also fell in love with Luis Enrique because of how he wants us to play and the way he behaved with the players from a human perspective.”

“But right now I have to keep studying and learning for all managers. I have to absorb something from every single coach, even those who have different philosophies from Luis Enrique or Guardiola.”

“There’s certain moments and situations you need to analyse. Many teams win and many teams have fun doing slightly different things. I’m thinking about various names like Klopp, Simeone or in Italy the likes of Gasperini, Juric, and Conte.”

He added, “You have to respect and study all types of playing styles and philosophies in order to create your own while respecting the characteristics of the players you have.”

Finally, the former midfielder was asked why Roma’s Nicolo Zaniolo was excluded from Roberto Mancini’s recent list of call-ups for the national team.

“Mancini and I always talk about the players but ultimately he’s the one who makes the choices. If he wants to, he’ll sometimes explain his decisions.”

“But I guarantee the coach always makes decisions for the good of the national team. It hasn’t been too long since I was a player, so I’m aware players are disappointed when they’re left out, it happens.”

Adding, “We have strong players and you have to trust a coach like Mancini, who led us to experiencing one of the best evenings of our lives (by winning Euro 2020).”