Di Francesco ahead of SPAL: “Luca Pellegrini will start, Schick has a slight injury”. 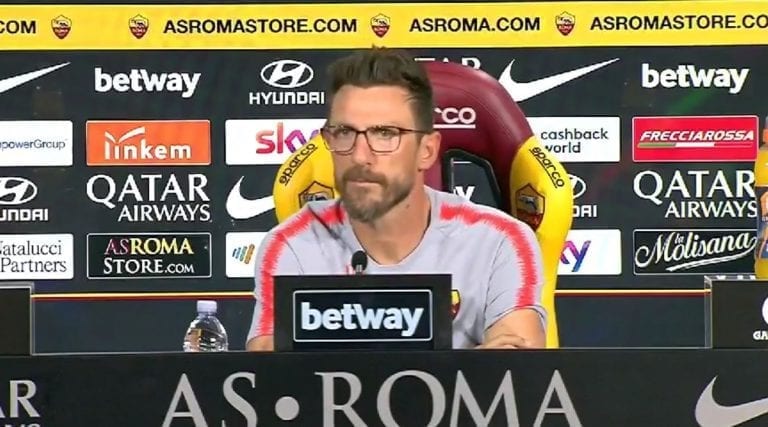 Eusebio Di Francesco spoke today ahead of tomorrow’s match in Rome against SPAL. These are his words:

How did you find the team after the break?
Everyone didn’t arrive together, Kluivert and Nzonzi have yet to train with us since returning. I’ll have a chance to see all of them together today. Schick has a bit of a knock but I think he’ll be okay. Apart from the injuries you already know about, the players are in good shape.

Will you take note of players’ minutes in this upcoming period?
I’ll bear in mind how much they played with their national teams, both for this game and then the Champions League. It is normal that I will take into account the player’s minutes, I do not know if in this game or the next. We hope to recover De Rossi and Kolarov possibly for CSKA. This would allow us to have more solutions in more areas of the pitch.

Will Schick’s injury make it an issue for tomorrow when he alternates with Dzeko?
It’s an evaluation that I have to make, it’s very important. I had something in mind, but I’m still unsure as to what I’ll do tomorrow. Either he or Edin will play, I can not give a definitive answer because I have to see them on the pitch. Yesterday he did not train with the team.

Pastore?
He started training with the rest of the lads again yesterday. He’s worked hard the last few days and he’ll almost certainly be in the squad.

Coric?
I don’t think he can play on the wing based on what I saw in the pre-season and in training. For me, he’s a central midfielder who can also play as a trequartista and, with some improvement, even one of the two places behind the attack.

Can Zaniolo play as a mediano?
I’ve always used him as a trequartista or mezz’ala. I leave these specimens to you, it is not yet ready to do this, by experience or age. Maybe in the game when you have to go to win you can do, but starting is a choice that I would not do.

Kolarov is out, so is Luca Pellegrini ready to be called upon or will you play Santon?
Luca Pellegrini will start again tomorrow. I want to give him a run in the side to aid his development. He has great ability but he needs to keep working away and keep improving. He has the physicality and other great traits, he must learn to exploit them better. He’s young so it’s normal he still gets some things wrong.