Di Francesco: “Atalanta are very physical. Karsdorp could start again, Nzonzi and De Rossi are back”. 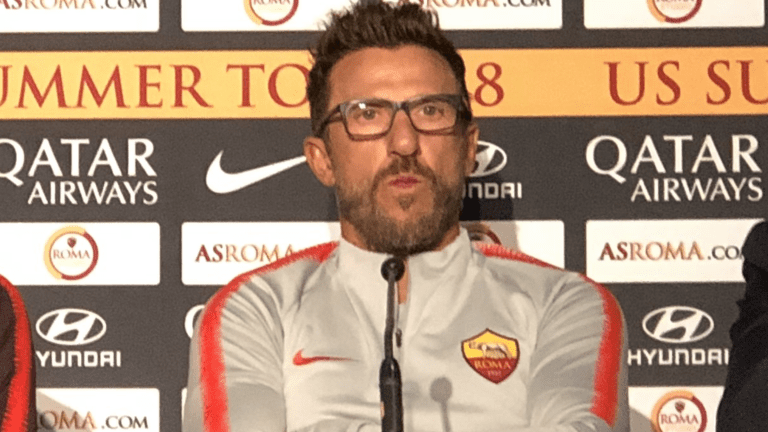 Roma manager Eusebio Di Francesco spoke ahead of tomorrow’s clash in Bergamo with Atalanta. These are his words:

De Rossi returned to the group, how did he react? Is he available?
Yes, I’m very happy with how he reacted. With Genoa, I called him for moral support, now he is available. He has no minutes in his legs, but his knee has reacted quite well. We are satisfied with his first week back.

Can Zaniolo play on the right tomorrow?
We had some physical problems with Pellegrini and Florenzi, the formation for tomorrow is still in the balance. They are all valid options, I have to evaluate the physical options. Florenzi can do that role, as can Kluivert or I can pair Schick with Dzeko. These are all solutions that I will take into consideration for this match and those that follow.

How is Dzeko’s condition?
This week he trained really well. A striker needs to score, he was enthusiastic about the team’s performance. He knows how to play football, he knows how to send his teammates on goal, it’s normal he has to score goals. Soon they’ll arrive.

Is Karsdorp ready to do three games in a row?
In my opinion yes, there was a longer recovery time for him, but he has rested in some training sessions —- he and Santon are on the ballot for the role of full-back.

Can Inter be sucked into the fight for the third or fourth place?
It is obvious that we must first of all try to get fourth. Inter have a good advantage, then we all know that we have to play the matches. Atalanta is a very worrisome opponent for fourth place, they don’t have a European competition to worry about. It’s a team that is scary, they have all the potential and their cards in order to be able to aspire for fourth place. It is a strong team.

Gasperini spoke about the interest of Roma for Mancini. What do you think of this player?
You can ask another question. I’m not talking about players who don’t belong to Roma. I am a very punctual, I won’t discuss an opponent ahead of a match.

Could Nzonzi start?
They’re a physical team who press, as we do, he is a physical player, he can be very useful for this match. He has fully overcome all the problems and could be there.