Di Francesco: “Both the club and I wanted a ritiro”. 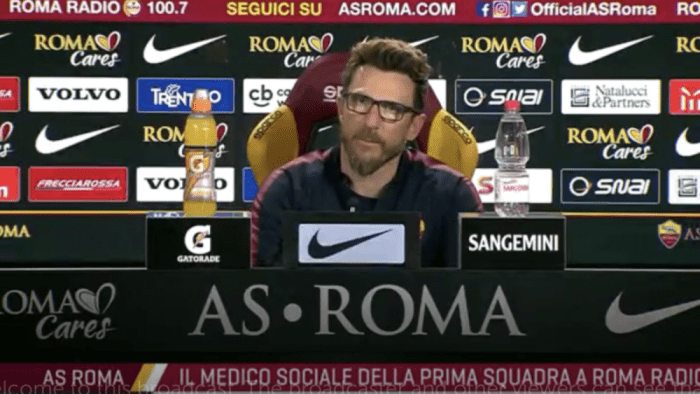 Eusebio Di Francesco spoke today ahead of the match against Frosinone. These are his words:

How did you think the team was during the ritiro?
We will really find the answers tomorrow. It was a ritiro wanted by both myself and the club, to reapply some things and to examine together what the problems were.

Tomorrow there is Frosinone, do you expect a match similar to that with Bologna?
The data and numbers say so, the teams resemble each other by tactical attitude. It will be a similar match, we will play at home, we are obliged to look for the three points.

Your opinion on the summer market?
It’s a mistake to talk about this now, even if you try to goad me into doing so. I have to only think about working and making the most of my roster, we’ve only had five matches, we can do much better. Talk about the transfer market or the players you go to face Bologna with…this Roma must be superior. It is not correct to make judgments at this time.

Dzeko will rest against Frosinone ahead of the Derby?
There are so many matches on the doorstep, it’s an evaluation I’ll make. Either he or Schick will play. There’s the Derby and the Champions League, Edin has also played a lot with Bosnia.

Is there any problem with Karsdorp?
Mainly technical, there was no quarrel with the lad, it was my choice, I have three full-backs. He must work and work better to regain the position he lost. Everyone has to prove it on the pitch.

Pallotta said he was disgusted after Bologna. Do you feel the confidence of your President?
I would have worried if he had been happy more than disgusted. There is no need to feel trust from anyone right now.

How is Perotti?
He is injured, he will not be available, he has a flexor problem. Yesterday he underwent exams, we hope to have him available against Empoli.

Alberto Aquilani: "Roma have everything needed to win the Conference League."
| 17 May, 2022
Milan still eyeing Cristante reunion
| 17 May, 2022
Roma's Nicola Zalewski called up by Poland for Nations League
| 17 May, 2022