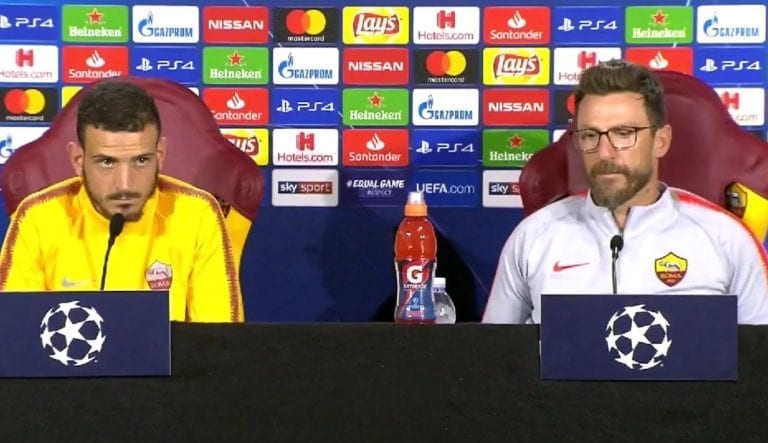 Roma manager Eusebio Di Francesco and Alessandro Florenzi spoke today ahead of the Giallorossi’s clash against Viktoria Plzen. These are their words:

Will you change formation given the absences of De Rossi and Pastore?
I worked a lot with the 4-3-3, as I am doing with the 4-2-3-1, we can alternate systems. If you noticed, Cristante did well when he came on in the Derby when we moved to a 4-3-3. It also depends on our opponents.

Kluivert will be ready?
He’s one who could play from the start.

What sort of period is it for Dzeko?
I liked what he did in the Derby, he just needs to find a goal, he only had trouble for about 10 minutes in the Derby where he had issues holding on to the ball. I’ll keep him close because he’s one of those attackers who needs to be coddled a bit. He’s very important, scoring a goal will calm him.

Nzonzi?
I changed a lot and tried to put the guys in the right place. Steven is growing, he arrived here without ever training. The mistake that many players make is to think that their only opportunity to perform is in matches. Take Santon, for example: he wouldn’t have been able to do these latest performances without training. Training is the basis of performance. On the pitch, you have to combine the physical, technical and mental components. Without this, you do not go anywhere.

Is Luca Pellegrini ready for his Champions League debut?
It’s always an idea, but everything goes forth with what I’ve already said on Santon. He (Pellegrini) has important qualities but must continue to work with humility. Let us remember that he has played 15 minutes in Serie A, he entered the match when we were winning 3-0 but he did not come on by chance, I did brought him on because he is doing well. I do not exclude that I could play him from the first minute, I’ll keep him in mind. But it depends on him: players are the ones who give themselves at my disposal in training.

You returned to your old role in the Derby.
I feel good on the pitch, when I’m on the pitch I am happy, I’m at the disposal of the manager to play in every role.

What sort of path do you expect in the Champions League?
We hope to replicate last season, it will be difficult and complicated, it depends on many factors, especially on us. Tomorrow will be the first home match of this new Champions League campaign and we want to make a good impression.

A judgment on Santon?
He arrived to too much criticism given the guy I know he is. I am very close to Davide and I was happy with his arrival. I don’t make judgements on even myself and I certainly won’t do so on my teammates, but I will say he was one of the best on the pitch in these last two matches. I am happy and hope he has more so that Roma can win.