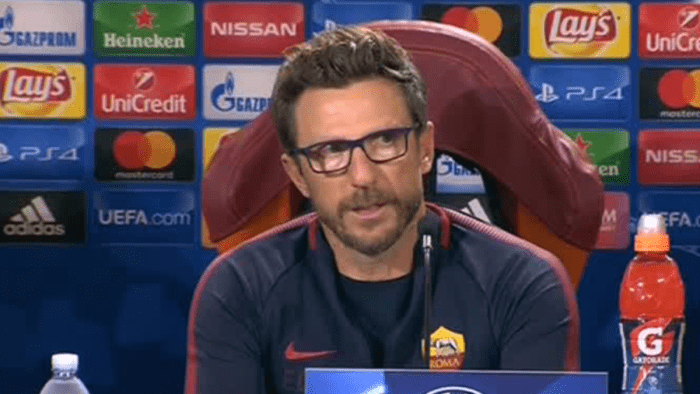 Roma manager Eusebio Di Francesco and midfielder Radja Nainggolan spoke ahead of the clash against Chelsea. These are their words.

Do ​​you imagine playing like you did in London tomorrow or is it better to play for a point rather and no points?
We played in a way that represents our identity. Our mentality has got to be the same, as I said after the match after Chelsea, that has to be a starting point for us.

Schick?
He had a little trouble kicking the ball in the final session, he had another exam and there are no injuries. He’s fine doing everything else but he won’t play because his kicking is limited. We will then evaluate him for Fiorentina.

The renewal of Fazio and his importance?
I’m happy for him as he’s shown it on the pitch. He always performs well and has became a leader of our defence and is important. Many thought he was less suited for a four man defence, but is imposing his personality. He works so hard with the defensive line and he has grown so much.

Defrel?
I will evaluate him today in training, both him and Manolas.

Will Chelsea allow you as much possession as in the first match?
David Luis was used as a midfielder, so they may recover a player to play there. And plus Chelsea have the ability to with two playmakers in a 3-4-2-1. Maybe tomorrow they will surprise us, but I am prepared for all scenarios. If Kanté comes in, he could change something. For them, he is a very important player.

A victory would send a strong message.
If we win, we would make a big step towards qualifying. Lately the results he been positive for us but you can always do better, because always winning 1-0 can be risky and you could be made to pay.

On a mental level, is it be more difficult to prepare for tomorrow’s match than the one away?
I do not know if it is more difficult, but we know that they will recover some players, and plus they have had positive results lately. We have to respect them but also be aware of our abilities, we almost brought home three points, though, Chelsea is always a great team. We will face them at home and I hope there is the full stadium. All the factors are there for us to do well.