Di Francesco speaks ahead of opening clash against Toro 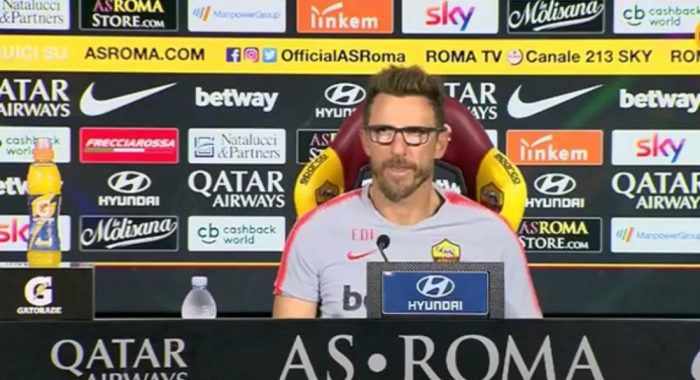 Roma manager Eusebio Di Francesco spoke ahead of the Giallorossi’s clash against Torino. These are his words:

What differences are there compared to twelve months ago?
So much has changed over the past 12 months. The boys are even more aware of what they’re capable of and have a better grasp of the football we want to play. So I want us to make a good start in what is set to be an extremely tough game away at Torino.

Is it difficult to choose the eleven starters for Torino-Roma?
When you have difficulty in being able to choose, it means that we have brought players in who have important qualities and who have had the opportunity to train continuously during this period. This is why I’m happy and I assure you that I have some difficulties in choosing the first formation, but it’s OK because I do not like having too many certainties.

Who is in a better condition between Pastore and Cristante?
In my opinion, they are both in excellent condition, there could be one or both of them as starters due to what they’ve done in pre-season. I have often heard of two playmakers as their characteristics, one of them yes, but the other has more characteristics of a central midfielder.

Nzonzi? Is he able to play with De Rossi
Rossi?
He has trained once with the team, he and Perotti will not be called up, he has to regain his conditions, he is a world champion, he rightly celebrated a lot. Why not with De Rossi? I have shown that I am not integralist, we will see what I will do. They’ll certainly dual it out but it’s possible they play together.

Your final judgment on the market? How is Olsen?
Many choices have been made, linked to many situations. More than quantity, I would talk about the quality of purchases. It is not easy to replace Alisson, one of the best, if not the best, in the world. Robin proved to have important qualities at the World Cup, he immediately made himself available to the team. Tomorrow he will play as our starter.