Di Francesco speaks ahead of Sassuolo 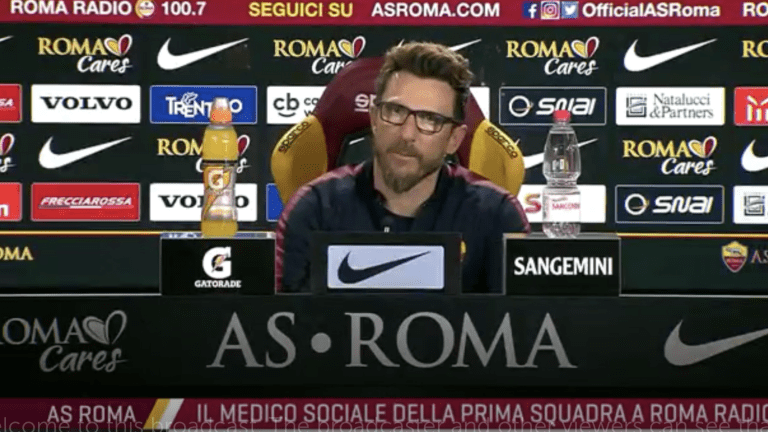 Roma manager Eusebio Di Francesco spoke today ahead of tomorrow’s clash against Sassuolo, which will mark the end of Roma’s 2017-2018 campaign. These are his words:

How much will the right approach matter?
Approaching all matches well is essential for growth. The goal of finishing third has not yet been reached. Against Sassuolo it will not be easy, they have lost only one match in the last ten. We will have the desire to play an important match.

What are your feelings on returning?
I am happy to see my many friends, many guys with whom I have shared important moments. These were unique emotions.

Have you asked Monchi for gift in Alisson?
In football, there is never anything definitive, but from what I have been told, Alisson will remain here in Rome, I would be very pleased by this for our path to growth.

How are Alisson and Ünder?
Alisson will not play, he still has some muscular discomfort. Skorupski will play. Ünder will make the trip and will have a final test tomorrow morning, he is trying to clench his teeth, he took a bad blow. He and Fazio are in doubt.

Politano and Berardi: could you train them again?
I do not want to talk about players who are not on Roma. I do not want to give you any headlines. I am fond of many players. Magnanelli is the emblem of the player I would like to see in every team. Matteo and Domenico are two players who are really very close to me, they are two talented ones.

Will you support Lazio or Inter?
I think Lazio has an advantage. The final result does not interest me.

Corić and Marcano?
I said it already, but I won’t talk about players not on Roma. You did well to try, though. As soon as players are bought for Roma, I will be able to talk about them. We are working in symbiosis with the director and the club on the market. This week we started talking about the options, previously, the only thought was qualifying for the Champions League. You (the media) have written about so many names, sometimes you know more than me, you are well informed, sometimes I have to ask for confirmation.