Di Francesco: “The team is doing well, but there’s still a lot to do.” 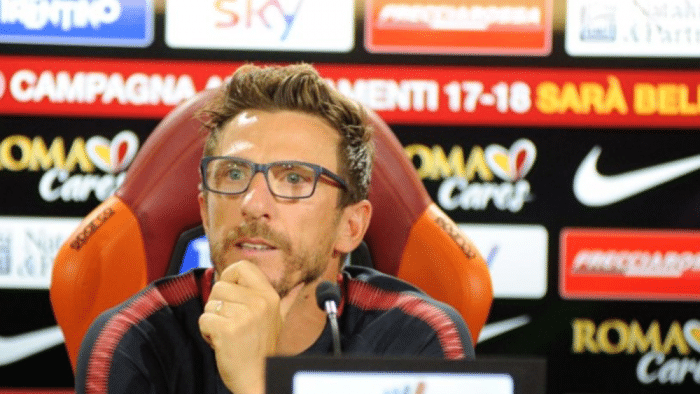 Roma manager Eusebio Di Francesco was interviewed today by Radio Rai. These are his words:

You had many absences yesterday.
They were due to the disqualifications of Nainggolan and Pellegrini. Nonetheless, Roma must have a roster that, even in difficulties, must be able to come out and do as we did yesterday.

Who can be compared to Ünder?
I struggle to make comparisons. I have not seen similarities to anyone yet. He has great quality and ability in preparing to shoot the football but being able to hide it until the end, just like  Vincenzo Montella, but they do not have the same characteristics as a player. He simply has the same ability to execute. This comparison is linked only to a technical characteristic.

At what point is your Roma?
There is still a lot to do, but this team, despite the change in how we train, is doing well. We did very well up until December, then we had 40 days of difficulties related to various situations. After the transfer market, which may have been a distraction but should not be an excuse, we have found compactness, but we must be continuous for all 90 minutes, which we still aren’t, as demonstrated yesterday.

Is Roma a Scudetto team?
The gap is there, but we could have a few more points, but we left so many points in the street and failed to bring them home after our nonsense against Chievo and Genoa. We have important potential, but I have always said that we are a bit behind Napoli and Juventus due to our group. We have brought in many youngster, like Ünder, who need time to adapt. I’m happy to manage this Roma but I also expected a few more points.

The supporters have asked not to sell Dzeko, Nainggolan and Alisson.
I train them, I do not handle the transfer market.

Roma concedes few goals but also scores few goals, but yet you are fourth.
The numbers are shocking between the defensive and the attacking phases. We have lacked a certain level of concreteness, plus we were a bit unlucky, but also not very determined near the goal. I know only one way fix this: work, work and work in order to improve the defects we have in attack right now.

Can Schick play behind Dzeko?
Absolutely yes, in the 4-2-3-1, he would be more attacking than a trequarista like Nainggolan. You can adapt him to all the possibilities, he has really important qualities, but first, he must find his condition and continuity in training.

Is Totti a resource for you?
Totti is a great resource. He is inobtrusive but is very important inside the dressing room. He gives me a little bit of information on the mood of the team, I arrived only this year and perhaps I am less aware of certain situations.

How is Karsdorp?
His rehabilitation is continuing. We must not be in a hurry, as you saw with Ghoulam. It is better to wait a little longer.