Dzeko: “I still have a couple of years to bring the Scudetto to Roma.” 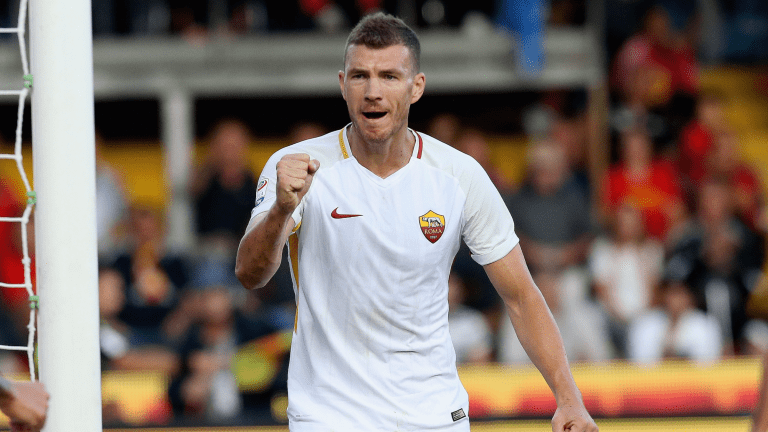 Roma attacker Edin Dzeko spoke today to Kicker. These are the words of the Bosnian:

The Roma supporters?
Fans in Rome are incredibly fanatical, and football here is sometimes over-exaggerated. At the same time, however, playing in front of them and their enthusiasm gives you a boost. Totti’s farewell was exciting, I was about to cry because a legend stopped playing football, but it was the right time (for him) to retire, he even knows that. In Rome, it is difficult to go unnoticed: if someone sees me at dinner, chaos erupts and then 100 (people) ask me for autographs. I try to go unnoticed, but you live very well here, my wife and my children are good here, too. We are in mid-November and it’s still warm here, that’s not the case in Germany.

A comparison between the Bundesliga, the Premier League and Serie A?
The hardest training sessions were the ones at Wolfsburg, but this was also because the manager was Magath. Our work was rewarded by winning the title. The Premier League is total football. In Italy, there are more tactics and, for some, it may be boring. Though, I have learned things here that I had never seen throughout my career, I am improving in many respects. Since 2011, Juve have been too strong for the others, they went out and spent €90 million for Higuain. This year, however, the league is more balanced, but the Bianconeri remain the favorites. I feel good like I never have before, I still have a couple of years to bring the Scudetto to Roma and repeat what I won with Wolfsburg and Manchester City.

The Derby?
For those who haven’t lived through it, it is impossible to understand: if you win for the fans, life is more beautiful. The protests by the supporters are over, so it will be one of the most intense Derbies. The matches like this that happened in a half-empty stadium were upsetting.

What do you think of the high prices of the current transfer market?
No player should be worth €222 million. Six years ago, you could buy a top-striker for €30 million, now you spend €50 million for a defender.