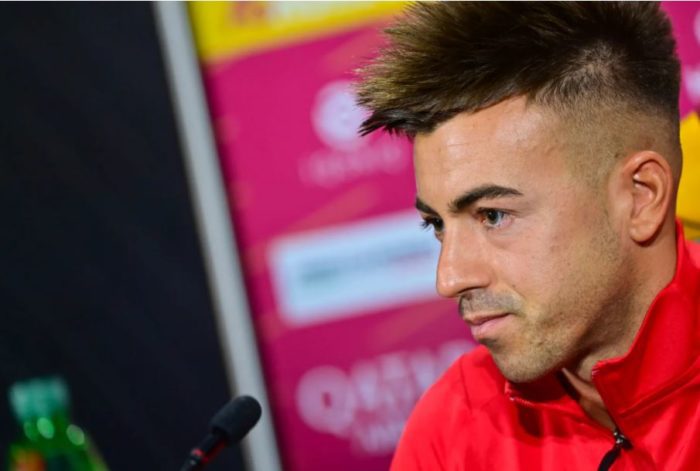 Roma attacker Stephan El Shaarawy was presented to the media this afternoon after he officially completed his return to the club a few days ago.

The Italian rejoined the Giallorossi after he terminated his contract with Chinese side Shanghai Shenhua, who he joined the summer of 2019 from Roma.

“First off, I’m very happy to be back at this club. I received a warm welcome but I will say it again: it’s as if I never left,” began El Shaarawy.

“I’ve said a number of times that I built much more than just a footballing life at this club, I established many relationships with several people on and off the pitch. I was happy to be welcomed by the President, Tiago Pinto, and, above all, the manager. They displayed huge interest and trust in me so I hope I can repay them.”

Asked about his physical condition and role, the former Milan man admitted that he’s not in the best form despite having trained on his own with a personal trainer for the past four months. However, he reiterated that he is eager and enthusiastic to get back on the pitch with Roma as soon as possible.

“I’m working with the training staff to get back into the best condition possible. I’ve been training on my own and doing my best to stay fit but I’m enthusiastic to put on this shirt again.”

“Tactically, I’ve played in numerous positions. Fonseca’s wingers often drift to the middle, which is how Di Francesco had us play — it’s not a fixed position. Though, I told the manager that I’m entirely at his disposal to fill all of the attacking roles.”

El Shaarawy then addressed the situation involving Edin Dzeko, who was reintegrated into the team today after being frozen out for the past two weeks after a row with Fonseca.

Interestingly, El Shaarawy nearly came to blows two years ago with the Bosnian in the dressing room after Roma dropped points to Sampdoria in March 2019.

“I’m glad I get to play alongside Edin again. What happened between he and I is normal in a dressing room, it wasn’t a problem whatsoever. Something like this is dead and buried moments after it comes about.”

“For me, I think the atmosphere is calm. Edin has a smile on his face — we all know what sort of qualities he has. We’re talking about a player with a lot of personality and I’m certain he will return to being an important player for Roma.”

Finally, ‘il Faraone’ explained what he missed most about Roma and how he was just steps away from rejoining back in October.

“It was a bit of a difficult situation in October, lots of waiting, and sometimes the timing just doesn’t quite work out. But now it has all worked out for the best and I’m happy to be here again – I can’t wait to write another chapter with this club,” he said.

“I’ve had the chance to reconnect with all the people that I’ve met over the years here. Whenever I’ve been back here (since leaving), I’ve always felt so much affection from those around me, I’ve felt that people are supportive of me.”

“I realised that as well when I went to the Europa League game last February, with the fans around me. That’s another motivation for me to hit the ground running again.”