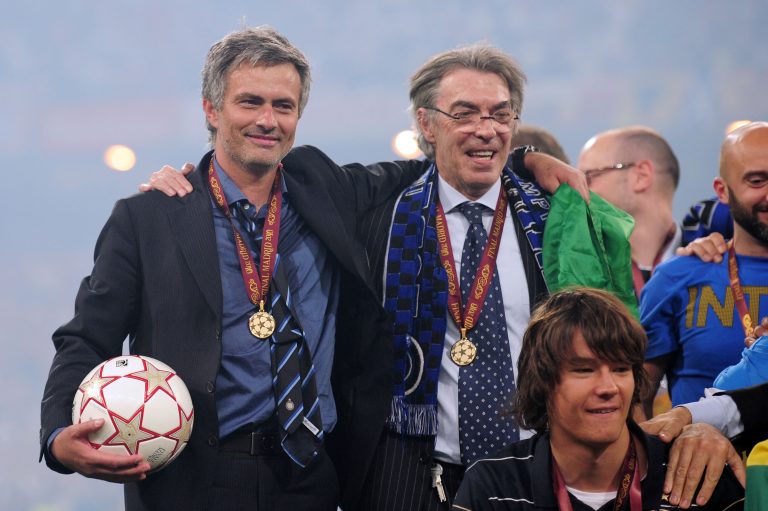 Former Inter Milan president Massimo Moratti shared his thoughts ahead of Jose Mourinho’s return to the San Siro in the Coppa Italia against Simone Inzaghi’s team.

“I think it will be pretty emotional to see Mourinho climb up the locker room stairs and take a seat on the bench, but not on Inter’s bench,” Moratti said to Corriere dello Sport.

“I already know that I will be excited because the images of when he was a protagonist with us will come to mind: José has given many beautiful things to Inter and to the city of Milan that are not forgotten with the passage of time.”

“We haven’t spoke to each other in recent days because it didn’t seem the case to me, but maybe we’ll talk to each other after the game or in the following days.”

“Every now and then we call each other and he is always affectionate and very nice to me. We remained connected, it is true, not only for what we won, but for the person that Mourinho is.”

On what could have been had Mourinho stayed with Inter instead of joining Real Madrid:

“Impossible to make certain assumptions. It went like that because it had to go… and because he wanted to try a new experience at Real Madrid.”

“After some time and with a cold mind I say that it ended in the best possible way for everyone: he was satisfied with the results of that season and the new challenge he had accepted; us because we had achieved the maximum, that success we had not tasted for years, the triumph in the Champions League. If we really had to separate, there was no better ending than the one we had.”

On Mourinho’s time at Roma:

“At the beginning I thought he had a good team at his disposal, but not a complete squad to compete for the title and in fact I was not wrong. Now it seems to me that the team has been improved and can play a good second half of the season.”

“For him it is a new adventure, in a challenging place: he must be given time, but he will do well.”

“I believe he can win something in the capital. His career speaks for him: of course, he should be given time to build, but I have no doubts about his abilities and the fact that he is a winner.”

“I think it’s normal that Roma fans have fallen in love with him. He is someone who knows how to make himself loved, but he is also good, serious and professional.”

“He wins everyone over because he does not treat the task entrusted to him with superficiality. He gives all of himself to obtain the results that have been asked of him. Or maybe more.”

“The Friedkins got one of the best managers around. And then his return was also important for Italian football: a coach with his intelligence, his media presence and his professional skills is an added value for Serie A.”

“Beyond the ability to make the team play well and enhance their talents, like Zaniolo, I would say that he is exceptional in creating a strong relationship with the group and in always making it clear what he has to say.”