Just a few signatures were needed before the proverbial “Here we go!”

It was September 2020 and Rick Karsdorp was on the brink of completing a loan move from Roma to Atalanta in order to replace Leicester-bound Timothy Castagne.

The curtains on Karsdorp’s time with the Giallorossi were ready to close—just three years since he joined from Feyenoord in a deal that cost €14 million plus €5 million in bonuses.

Roma were prepared to offload the defender and waive the white flag on yet another acquisition made by former sporting director Ramon Monchi. The Spaniard’s two-year stint in Rome has become a taboo topic, seemingly overlooked by most football analysts when discussing his career.

Nonetheless, Karsdorp looked like he’d be the next added to the list of Monchi transfer flops following three straight injury-plagued seasons. Not even a loan return to Feyenoord in the 2019/20 season seemed to help.

Even though things appeared bleak, the Dutchman was determined to relaunch his career with Roma.

However, the summer of 2020 was an awkward period for the capital side.

The club was without a sporting director after they sacked Gianluca Petrachi in June 2020—forcing CEO Guido Fienga and two prominent Italian agents (Gabriele Giuffrida and Paolo Busardò) to oversee the transfer market.

In addition, James Pallotta was closing in on an agreement to sell his stake in Roma to The Friedkin Group.

After several meetings in Milano, Roma and Atalanta reached an agreement regarding the transfer of the Dutchman, who would join the latter on loan with an obligation to buy.

However, Karsdorp pumped the brakes on the transfer, hoping to relaunch his career with Roma and put the last three years behind.

The rest as they say…is history.

In the two seasons since, Karsdorp’s career has done a 180-degree turn, a renaissance rarely seen in the world of football.

“Rick has always believed that he could be an important key player for AS Roma,” Karsdorp’s agent, Johan Henkes, exclusively told RomaPress.

“Due to a serious injury in his early period, though, he was unable to show this. After five years, though, he’s become an import and integral part of the team.”

Henkes, who was appointed as Karsdorp’s new agent last year, also credits the Giallorossi’s tactical set-up, “As a wingback, he shows off his football qualities optimally.”

“The turnaround has also come through the confidence of the club. They see in Rick an important link in the project for the coming years. He’s a player who returns confidence on the pitch.”

Karsdorp’s positive on the pitch performances can also be attributed feeling more acclimated to Italy and the environment of Rome. Earlier in his tenure he admitted it was a culture shock after moving to Italy, initially struggling to learn the language.

Fast forward to today, though, and the defender has no issue giving interviews in Italian and certainly appears to be more comfortable with life in the Italian capital.

“After 5 years Rick has really become a Roman. It is no longer the young boy who arrived in Rome from Rotterdam, but a professional who knows what he can and must do” continued Henkes.

“You can really write these first years under ‘bad luck’ as he has shown his potential in recent years. This has always been there, but the team and the way of playing are also an important role in this story. The city is like home to him and he knows Italy very well after so many years.”

“However, I think as his agent he hasn’t reached his top yet. Rick can do even better when used optimally. His football ability is great for a wingback, there is even more to get out of this.”

Henkes also outlined the impact made by Roma boss Jose Mourinho on his client and what the future could hold for him.

He said, “Jose Mourinho demands commitment and absolute will to play for him and the club. Every match he fights a war and he expects quality and intensity. Of course every player has to get used to a new trainer.”

“However, the fact that Rick has played almost everything and has rarely been substituted, explains the coach’s confidence in Rick this season. Rick delivers and never lets the team down. I think the trainer really enjoys working with Rick: both are absolute winners!”

Finally, “As for his future, you never know what the future will bring in football. However, as mentioned, the management has a lot of confidence in Rick and he is part of the project for the future.”

“Rick and Roma can both do better. Given their potential and structure, Roma should be playing in the Champions League and challenging for domestic silverware—which hasn’t been the case in recent years.”

“Rick wants to achieve as much as possible at the highest levels. I think beautiful things are possible in Rome.” 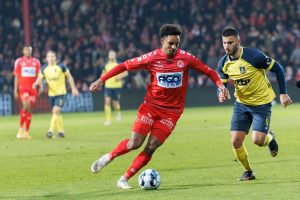