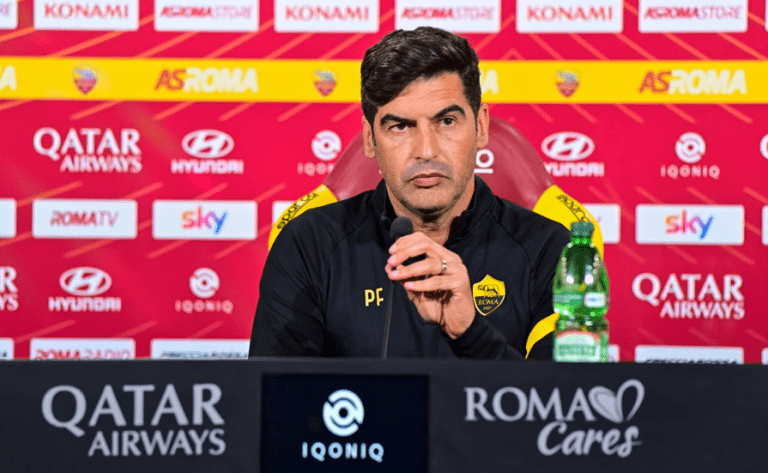 A reminiscent Paulo Fonseca faced the media for the final time today as manager of AS Roma.

The Portuguese technician will leave the club following tomorrow’s final match of the campaign against Spezia. The Giallorossi announced nearly three weeks ago that José Mourinho would replace Fonseca, who leaves the club after two years.

When asked about his feelings as he prepares to bid farewell to the Italian capital, the 48 year-old cited the relationships he built and the support of fans as the things that left the biggest mark.

“As I’ve said, it’s always been a great honour for me to be the coach here. The fans have always been so kind to me, we’ve had a great relationship,” he said.

“The same goes for those I’ve worked with here at Trigoria. I will keep all that with me. It’s difficult to pick the best match of my time here, but I think a lot of people have recognised that the team have generally played a positive, attractive style of football and we did that in a number of games. But it is hard to pick just one.”

When asked if there was a specific highlight that sticks out over his two years, Fonseca, again, discussed the relationships he built in Rome.

“It’s difficult to pick out a specific moment. Perhaps the most special thing I’ve built here is the relationship I have with you all [the journalists], with the fans, with those I work with here at Trigoria.”

He added, “All of that is built on respect and honesty. Of course, the results are always important, but the relationships you build are too.”

When questioned if he leaves the club with any regrets, such as his falling out with Edin Dzeko, Fonseca chose to remain positive.

“I think the team remained united – otherwise we would not have reached a European semi-final, we would not have played the way we did in parts against Manchester United. The squad always kept their ambitions high.”

“As for the Dzeko situation, every team goes through situations like that. We had a meeting to resolve the issue. And I think Dzeko’s most recent performance [against Lazio] underlines that the issue was resolved.”

When the questions shifted to tomorrow’s fixture, the Fonseca reiterated that his team is focused on winning in order to clinch European qualification.

“The squad has trained well this week. We want to win in order to qualify for Europe and we want to finish the season well.”

“Spezia are a team that like to play good football. They have a great coach in Vincenzo Italiano, who I think has a really bright future ahead of him. It won’t be easy to go up against them, it will be tough, but we want to win and come back with the three points.”