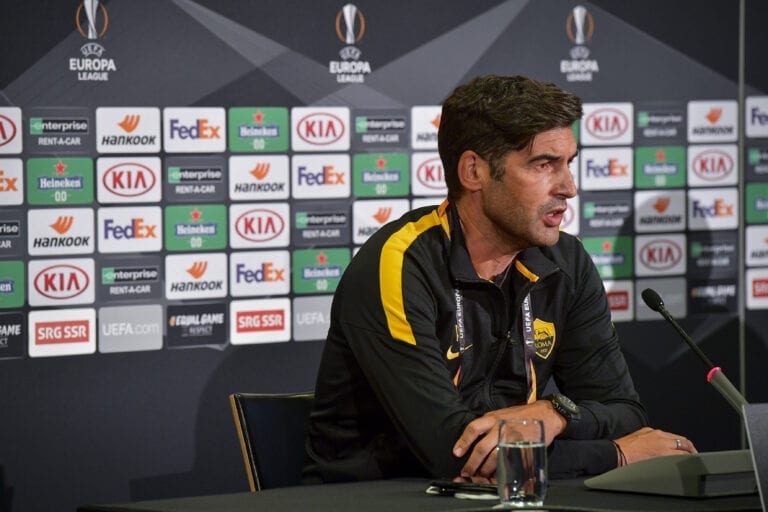 The Italian side enters the match after having cruised past Fiorentina in the league on Sunday in a 2-0 victory.

The Portuguese tactician began by praising ex-Barca man Pedro, who joined the club on a free transfer from Chelsea and has impressed during his first three months in the Italian capital.

“It’s what I expected. When I chose Pedro, I knew he could be a very important player for the team and I’m not surprised by his performances,” Fonseca proclaimed.

“We’ll see if he plays tomorrow but he’s an incredibly unique professional. He’s played in almost every match but we have to manage his workload along with Miki’s. He could play tomorrow, but we’ll see if it’s from the start.”

He continued, “Mayoral? What interest me most is that he plays, I don’t have a team that plays in Europe and another that plays in the league. From time to time, i choose to use Mayoral. I think the most important thing for him is to play.”

“Pastore? He’ll be back next week and we’ll see how much work he has to do. It’s important that he returns — the same for Diawara and Calafiori, who will also be with us soon.”

“In defence, Smalling won’t start tomorrow. It’s too much to have him start a third match in a row since returning from injury.”

Finally, Fonseca concluded with his thoughts on Roma’s opponents, “Cluj are strong, they have a very specific way of playing and they do it well. They’re aggressive.”

Then it was Bruno Peres’ turn to discuss tomorrow’s fixture. The Brazilian first discussed his future as his contract with Roma expires at the end of the season.

“Right now I’m only thinking about doing well for Roma, but I am motivated to renew my contract with Roma. I’m working hard because it’s something I want. I’m trying to do things to show I deserve the renewal. I’m sure if things go well on and off the pitch, we’ll all find a happy ending,” he said.

“For me, I think I’ve become a better professional. I struggled with my attitude and behavior with things I did off the pitch. But I’ve changed thanks to some things I’ve done and thanks to the help of my teammates.”

Many credit the defender’s improved performances with Roma as a result of Paulo Fonseca changing his formation from a 4-2-3-1 to a 3-4-2-1, which resulted in Peres moving to wingback.

“With the three-man defence, I can take advantage of my attacking characteristics,” he admitted.

Lorenzo Pellegrini's condition not cause for concern after win over Inter