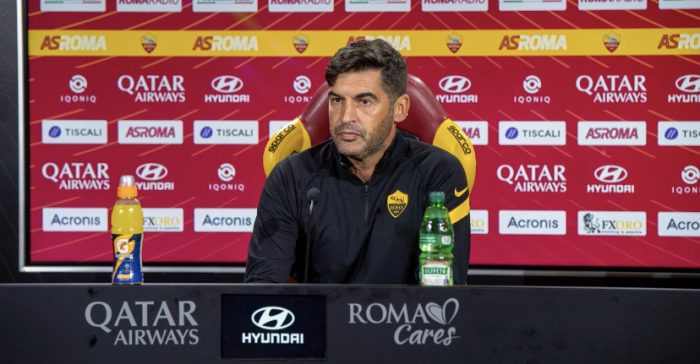 The Giallorossi will host Pippo Inzaghi’s side tomorrow evening at the Stadio Olimpico at 20.45 CET.

“Benevento are a great team – I’ve watched their games this season,” began Fonseca.

”They have a good coach and come to the Olimpico with confidence, so we know it won’t be an easy game tomorrow.”

“Pellegrini’s role? Lorenzo can play in different positions. Against Hellas Verona, he played in the same position as he did with Italy.”

”He can play different roles, but I think he has played very well in these last three games. There is no doubt that Pellegrini is very important for our team and is playing very well. In this system, he can play as a mediano, a trequartista, or in other positions.”

The Portuguese coach was then asked about Alessandro Florenzi, who left Roma to join PSG on loan this summer and has excelled since joining the French side.

“I wanted Florenzi to stay because he could be useful in this system. I talked to him, but he decided to go to PSG, but I understand his choice. But it was my intention to keep him because he could’ve been useful for us.”

Fonseca then addressed the goalkeeping situation as well as the club’s search for a new Sporting Director.

“Mirante will play tomorrow, then we’ll see who plays in the Europa League. The Sporting Director? The club is looking for this person because we need one. It’s important to have a figure like this at the club.”

”The transfer market? I believe that no coach is ever satisfied, they always want more. But we can fight with these teams, we want to do better than last year and return to the Champions League.”

“Villar? He is growing a lot and will play more this season.”