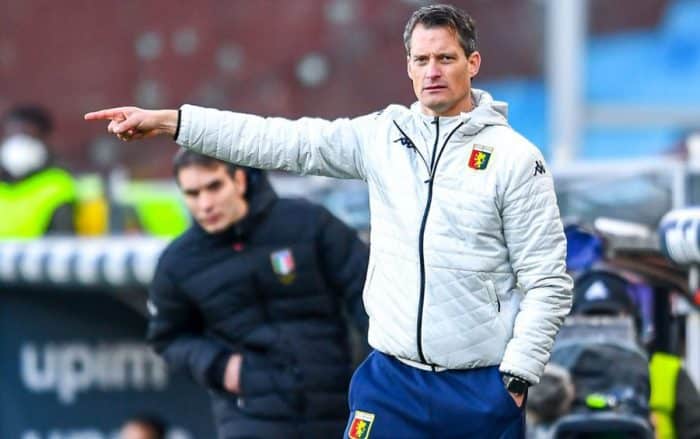 Genoa manager Alexander Blessin acknowledged his side have to be at their best tomorrow afternoon when they face Roma at the Stadio Olimpico.

The Ligurians travel to the Italian capital to face-off against Jose Mourinho’s men and continue their objective of staving off relegation.

Blessin, who was appointed by il Grifone three weeks ago, called on his team to build upon their performance in their recent draw against Udinese.

“I think we’ll continue see a change in the way the team plays, just like we did against Udinese,” asserted Blessin.

“The team and I have been working together for a few weeks and they’re beginning to get a clearer understanding of how I want them to play. We want to play our way and want our opponents to have the opinion that playing against us isn’t easy.”

“Ever since I arrived, the team seems eager to learn. They’re more than ready to absorb the things that myself or staff has to say during our video sessions. I’m happy with their attitude.”

“We also have a lot of new arrivals such as Amiri, Frendrup, Gudmundsson and Czyborra. They’re ready to play but obviously they’re going to need time to adapt. But the things I’ve seen in training have been positive. For tomorrow, though, Rovella and Criscito won’t be available, they’ll return next week.”

As for their opponent, Blessin admitted the capital club are a strong side. However, he also conceded there are areas where they can be exploited.

He stated, “There’s no question Roma have an incredible way of playing quickly. We’ve analysed their recent performances and certainly they’re very strong in their shooting ability.”

“But just like every team they also have their weaknesses. So these are the areas we’ll try to exploit. Nonetheless, they’re a great team with a great manager and we’ll have to give our best in order to compete with them.”