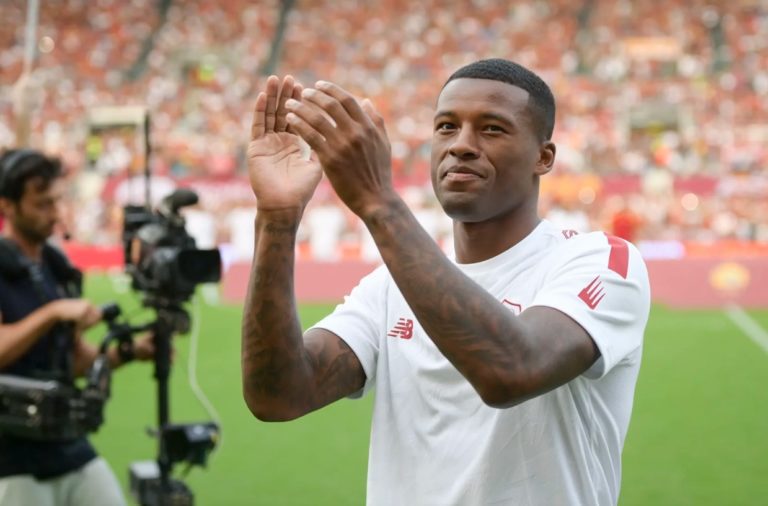 Gini Wijnaldum made his first appearance in front of the media as Roma unveiled their latest signing in today’s press conference.

The Dutch midfielder discussed, among other things, his decision to join as well as his personal objectives for the upcoming season.

“I have not taken in part in the team’s preseason, but that doesn’t mean I haven’t worked on my own this summer,” said the 31-year-old.

“I trained with the team and individually. So, it’s difficult for me to say if I can already play on Sunday. I do feel ready, but we’ll discuss it with the club’s medical staff and the coach.”

“I decided to come here because the club really wanted me. I talked to Strootman and Salah and they said plenty of good things about the club.”

“I even spoke to Hakimi, although he played for Inter, and he told me that Roma are a great club. When I was at Liverpool we played against Roma and the atmosphere was incredible with incredible fans.”

“I felt truly appreciated by the club. I’ve never played in Serie A, so I don’t know what to say about the league.”

“This is a team with excellent players. I can attack, defend and when I am fit I can play almost every game.”

“I think the team plays in a way that will allow me to show qualities. I hope that the combination of our qualities will be perfect.”

“It is always important to start well in the league, but also to grow as a team,” continued Wijnaldum.

“During the season there will be difficult stretches that we have to face together,” he said, alluding to the tight schedule that awaits Roma across several competitions.

“The coach thanked me when I first landed in Rome. We talked a lot when I got here. His career is incredible.”

On his first outing with Roma at the Stadio Olimpico with Shakhtar Donetsk, Wijnaldum commented, “The atmosphere was magnificent, truly special. I knew it would be like that because I played here for Liverpool, but the welcome I got was wonderful.”

“I was amazed at what the fans did for me and for the team. I didn’t realize it right away. When I arrived we went to dinner, my teammates were all happy and made me feel welcome. They were kind. Even during training it was the same good feeling.”