Jose Mourinho praises team mentality and spirit ahead of Bologna

Jose Mourinho addressed the media ahead of tomorrow’s midweek fixture vs Bologna.

“There is a need for a strong mentality, a strong group, an empathic group. A group that wants to play well.”

“The credit goes to the players, for those who don’t play a lot, like in the case of Diawara who only played a few minutes, who works a lot during the week, even with the feeling of those who arrive at the game and don’t play, but get to work with this professionalism it helps to have determination, but I would also say friendship.”

“Like Kumbulla who comes in to play for a few minutes and gets the yellow card to stop a dangerous play, he breaks the action, marking Milinkovic who is a giant. He does his job for a minute but comes out happy with what he has done for the team.”

“More than role, tactics, my work, more than formations, the credit goes to the players, for their mentality and for the group they are.”

On whether El Shaarawy can play on the right wing:

“I don’t know, because we’ve never tried it. But if the moment of difficulty comes, I’m sure he will do it and he will do it well.”

“He is fine physically, psychologically, he feels important. It’s been a long time since he played a full 90 minutes. After a period in China a player loses his qualities, not his qualities, but he loses a certain level of play.”

“He is having a season of development. He is doing very well. If he has to play on the right wing he will play there. Now we also have Viña available and with him at left back we can have Stephan in a more attacking position, but maybe also as an alternative to Karsdorp.”

“He has certainly had a very positive influence on many people who unfortunately have or have had his own problem. He has shown incredible strength, you immediately become sympathetic to that fight. People like him can influence many others, I have respect and admiration for those people.”

“There are many others who unfortunately suffer from it and he was a good example. He had tremendous courage, he never hid. He also wanted to work, he was an incredible example for me. It is not he who has to thank me for my little support, but I have to thank him, in the name of many, for the courage he has passed on to everyone.”

“Smalling is a great player, important to us. Right now we have him, Kumbulla, Mancini, Ibanez, we don’t have a problem now. It is not a situation in which he has to play because we have no alternatives.”

“We do the management, we talk to him. We only played the day before yesterday. It will also be the players’ opinion to understand, which is very important to me, more than the check-ups we can do with technology, the player’s feeling is very important.”

“In Smalling’s case if he tells me tomorrow he feels great, he plays tomorrow. If he feels 99 and not 100, I protect him. Only tomorrow will we decide.”

On Roma keeping a clean sheet in 9 out of 21 games:

“The data is important, Rui is important, but the team is more important than him. Rui Patricio is obviously one of the most experienced and important goalkeepers in Europe, there is no doubt. But with him in goal we also conceded 3 goals in Verona, in Venice. It’s not just him, it’s the team.”

“When the team plays well and defends as a team, it’s even easier for him. Obviously there are always moments in games when everything doesn’t work out and there comes a time when the goalkeeper can make a difference.”

“We haven’t had any problems in these matches, but when there was a need, there was. Obviously we are very happy with him.”

On Zaniolo’s new role in the team:

“He can play as a 10, as a mezz’ala, or as a sole attacker. He can do everything with desire, empathy and with this kind of mentality, like people who want to do everything for the team.”

“But we worked with him for a long time to play as a winger, with a certain freedom. The most similar role is what he has done in these last two games, as a second striker.”

“He is a bit like Carles Perez, he has always been a right winger and has played mezz’ala in the last two games with Nico as well, it had never happened before. It seemed impossible but it happened in the last few games.”

“One played as a midfielder, the other played as striker. Now we have lost Pellegrini until January, we cannot think of him.”

“We’ll see game by game, day after day, based on the difficulties we have, maybe we can recover someone. You have to manage things as they come.”

Roma to meet with UEFA 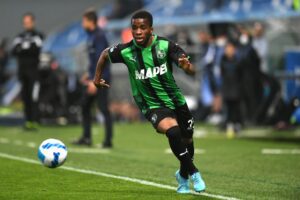