Kluivert unveiled to the media 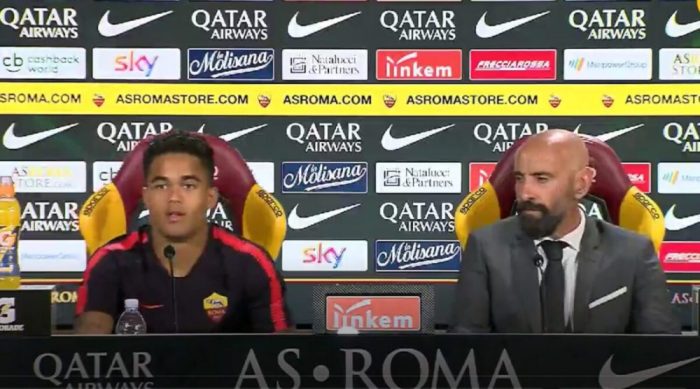 Today, Roma attacker Justin Kluivert was unveiled to the media by Monchi. Here are their words:

(To Monchi) How difficult was it to get to a young but coveted player like Kluivert?
Not so easy, I can not say how complicated talks were but it was a difficult negotiation because a player like this, a ’99 class and with his future, is a player wanted by everyone. But I always say the same thing, when the will of the player is there, everything becomes easy. The first time we saw each other it was important to help him understand that Roma was an ideal place for his path.

(To Kluivert) What do you hope to do at Roma?
I want to show my worth. I know I can improve in every area here – I am still a very young player. Defensively I know I can get better. “I want to show what I can do and prove my worth. I want to do better than I did in Holland. I can and must improve a lot. I can’t wait to begin the season. With the players we have, we can achieve big things this year.

(To Monchi) Are you satisfied with the team’s work so far?
Yes very, the team is doing well.

(To Kluivert) You make a move to a big club at a young age.
Being here at Roma is a big step in my career. I’ve joined a huge club – an ambitious club that wants to keep growing. For me, Serie A is in no way inferior to La Liga or the Premier League. There are some massive clubs and top players here.

(To Monchi) Did you sell Alisson because it was an irrefutable offer? Is the substitute Olsen?
First of all, to now, we have not closed anything, the deal closes once everything is ready. It is true that Alisson is in Liverpool, it is true that we are in a very advanced negotiation, but it is not yet done. If everything goes normally, it will close soon. I have explained many times: the job of the sporting director is not just to buy players, but to understand at any time what is best for the club. For the club, not only the sporting part is good, but also the economic one. An out of market offer arrived, a very important one, we evaluated the pros and cons and then we discussed. We sold Radja and Alisson, but we have bought 10 players right away, and then we continue to work. The word ambition is a word that is sometimes tossed around, what is ambition? For me, ambition is to do things that I have in my mind otherwise you’re naive. I do not want to do things that put this club in difficulty. We have, unfortunately, the recent examples of the failed clubs in this country, we have the example of a strong team that can not play in Europe, we have other strong teams in difficulty building a squad due to UEFA’s decision. I’m here to make the team stronger not for a year, but for many years, I’m 100% convinced. Last year at this time, we were saying the same things about Paredes, Salah, Rudiger. I think the team has had the best season of the last ten years. So I think it’s nice to talk about ambition, but ambition using your head. Alisson is very strong, I do not know if he is the best in the world, but he is one of them. Even Alisson had to forge a path: last year with the sale of Szczesny, the world seemed to end, but then we saw a great goalkeeper, it takes time. I know the fans do not have time. Olsen is a possibility, but not the only one, we are working calmly, without haste. It is better to be convinced and find the best economic conditions for the club rather than do things because of the pressure of Alisson’s exit. You know me, the greatest pressure I have to endure is my own, no one puts more pressure on me than myself.