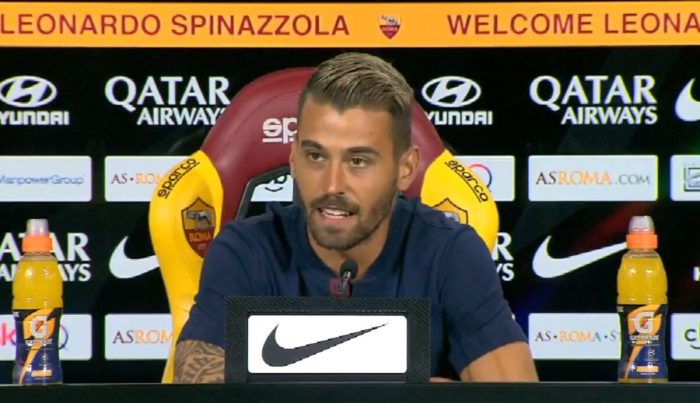 Newly acquired left back Leonardo Spinazzola was presented today to the media for the first time since joining the Giallorossi from Juve. These are his words:

Petrachi begins: “We are here to present our first purchase. Spinazzola represents a change of environment: he’s the prototype for which every Roma player must be based on. He arrived with a contagious enthusiasm and an important technical value. I’ve been following him for years so I must congratulate Paratici because he told me he’ll have an important future when he sent him on loan to Perugia. The lad made the right path in order to arrive here as a protagonist. I have huge expectations for him because he can lend us a big hand. Here is Leonardo Spinazzola”.

How did your first week of the ritiro go? What has Fonseca told you?
Good day, everyone. It’s been a good week of work here. The Mister told us what he wanted and explained to all of us his directions and our roles. I like it a lot – he plays good football. We’ll soon get our first test to try out everything we’ve learned.

From the outside, what was your impression of Roma?
For me, it’s always been a big club where important players have played. They’ve always been set-up to do important things. Playing at the Olimpico is always wonderful because of the stadium, the supporters and their passion. I’ve always enjoyed playing here.

Do you want to have a spirit of revenge against Juve?
No. For us it is a profession, clubs and players make their choices. Roma has been looking at me for a long time. When I was asked if I wanted to go to Roma to play a leading role or stay at Juve for another year as a second-choice, I decided to come here, where I think I can improve a lot.

Do you consider Roma a point of arrival? Do you think you’ll remain for a long time?
There’s so many paths that can be taken during a career, but Roma is a great club that I have always admired. It’s a profession and there’s judgments that are made after every season – you just never know. But I already have a dream for this year that I hope will come true: we’ll go very far with this team. Then there’s also the Euros upcoming so for us Italians it’s an extremely important season.

Is there a teammate who has impressed you? Can Fonseca become a top European manager?
Ünder. I already knew of him, but in training he has impressed me. He is a great player. The manager has great ideas, I really like the identity he’s giving us.