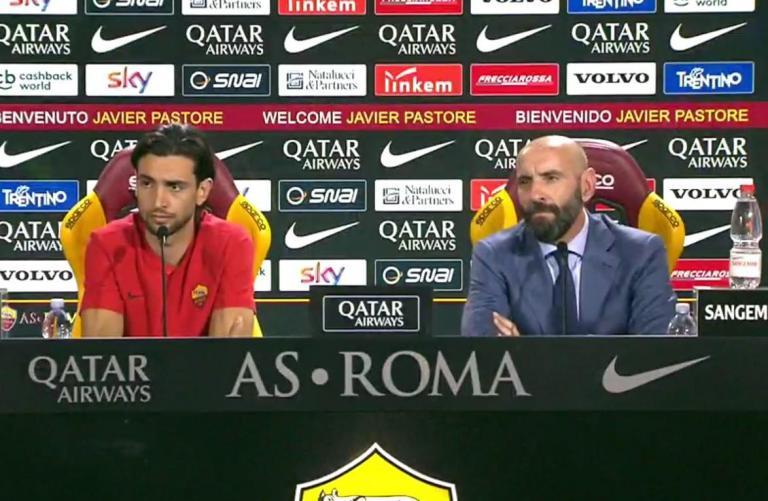 Monchi begins: “We are here to present Javier Pastore. For me, it’s a huge satisfaction to be here together with him. After having been a sporting director for so many years, I’ve found the player with the most quality. We are ready for your questions.”

(To Monchi) Was it a difficult negotiation?
Yes, but when you have the will of the player, everything is easier. He had other teams who wanted him, but everything’s easier if the player’s will is to come here. When we spoke, he was convinced to come here and it made it all easier.

(To Pastore) You did good but not great in Paris. A grade of your career so far?
I am very happy, I went to PSG at a time when they did not win much and in seven years we won 19 titles. I’m happy, the team grew a lot, with very strong players. One of the reasons I left is because I wanted a new experience and get back to feeling important to a team.

(To Monchi) There seems to be harmony between you and Di Francesco, what about Florenzi?
It’s normal that work of a sporting director is flanked by the manager, as you know, Eusebio and I have a great relationship, he and I are the same person when we talk about the transfer market. As for Florenzi, it’s not easy because he’s a very strong player, so far we have not found an agreement, but the idea, as shared with the manager, is that he remains.

(To Pastore) In what role do you see yourself?
The role is decided by the Mister, I want to start well in training and train good by putting myself at the disposal of the Mister. I talked to him a couple of times and I think he wants me to play as a mezz’ala. He did not specifically tell me about my role, but I’m available to play wherever he wants.

(To Monchi) Perotti said that Nainggolan was crazy but good. Was his craziness decisive in his sale?
We have made a choice, this is the job of a sporting direct. I realise that some understand this and others do not, an offer has arrived just like others. I listened, negotiated and found an agreement. It’s a choice that a sporting direct must make, I always do so by putting my face on it.

(To Monchi) What is Alisson’s situation?
Good luck to him for tomorrow. We do not have any offers up until now for Alisson. My only thought is waiting for the World Cup to finish, and hopefully for Brazil that won’t be for awhile, then for him to rest and come back here to train with his teammates. I must reiterate: today no offer has arrived. I can only think of continuity for Alisson. If you asked me about Schick, I would still answer, I have to think about today. I have read many things, but no offer has arrived. It’s a reality, I have to work with reality.

(To Monchi) There is talk of revolution, but many critics say that doing so does not lead to victory. Your response?
I respond with this: my history. I’ve always done this kind of work, if you look at my path I’ve always made purchases and sales, and I’ve won some things. I do not do revolutions, I do what I think is best for team, the club, the manager and players. We had a good season, we did something important, I do not want to stop there. I’ve always been very ambitious. That’s why I make a decision to create a team as strong as possible. The season will have its say, but what I’ve done to date is what I thought would be best for the club. We are waiting for the future.

(To Monchi) Were you disappointed with Nainggolan? Where is Roma’s market?
I want all the beauty we experienced together to remain, so I send him a huge “good luck” from my heart. As for the transfer market, I like this question because all the questions I’ve received have been about the exits. Roma have bought 8, maybe 9 players as we are close to Bianda. I do not think other teams have already made so many purchases. I believe we have to talk more about the incoming players, we always talk about sales. Up to now, Roma sold Nainggolan, Skorupski and Tumminello. I’m happy with what we did, I’ve always tried to do so, my path as a sporting director is to try to have the team as ready as possible, in order to make it work with all the players. It’s not done but an important part of the work is complete. It is a source of pride, of having worked so quickly and having the trust of the club. Today is 26 June, we are calm, we do not have to worry about Financial Fair Play. This is important, not all teams can say this. Sometimes we forget that there are sporting and economic rules, all of you have different situations in your head. Roma were in trouble last year, now we’re calm. We have made 8-9 purchases and now Javier is here.

(To Pastore) What impression did Monchi make on you?
I talked to him, he’s a person everyone has talked to me about. Everything was easier, he is the right person, he works well and he has always done great things wherever he has been. In Spain, he is very respected and when they saw the news that I could arrive I was told to only talk to Monchi. We have a good relationship, we hope to do important things together.

(To Monchi) Are you confident that you can keep Manolas and Pellegrini?
I spoke to Kostas 3-4 times, he’ll be a sporting director in the future because he seems to like the role. He is happy with the team, everything I have heard from him is about him remaning, I read that Chelsea could pay the clause, but up to today, I don’t even know if they have a manager. I do not understand  this. For Pellegrini, a week ago I had a meeting with Pocetta (the agent), we have not talked about the possibility (of leaving). Lorenzo and Kostas are 100% Roma players.

(To Monchi) Something is missing in the attack.
After we close for Bianda, we will take a bit of a break so we can start training and then we’ll see if we’re missing something. There’s still a lot of time before the end of the season, we’ll stay calm and then understand if we need to reinforce. Sometimes things can be planned but then you make changes along the way. This is how we’ve prepared, plus the market isn’t closed yet.