Manolas: “Top four is our objective.” 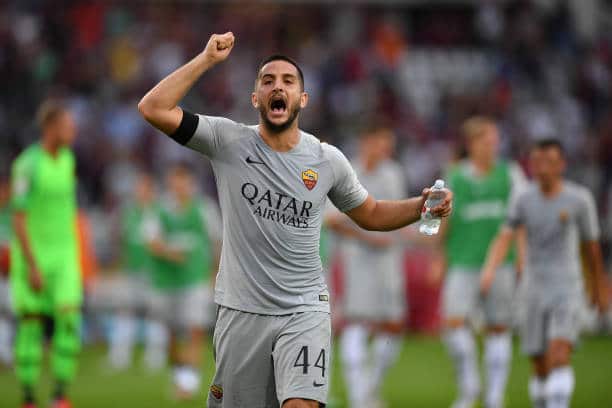 Roma defender Kostas Manolas spoke today to Marca ahead of the Giallorossi’s match against Madrid. These are his words:

How is Manolas? How do you think the Spanish football fans remember you?
I am a player who always gives everything for the team, but I believe that the Spanish fans remember me for the goal I scored against Barcelona above all else. It’s logical, it meant the team got to the semi finals. I always try to be positive, aggressive, but for the good of the team.

What do Roma need to do this season to stop them from playing like they did last time (against Real)?
We cannot do something similar. We are playing against the champions and that’s difficult enough as it is, imagine if we make it easy for them. We have to go to the Estadio Santiago Bernabeu to play our game but with a positive mindset. Always.

Is the problem the defence, the attack or the mentality?
The problem isn’t the defence or attack, it’s attitude. We have to defend together and attack together. A team doesn’t depend on four defenders or three forwards. It’s a question of everyone.

Roma were one goal away from the Champions League final, will it be possible to achieve such a feat?
Yes, very close indeed. We messed up in the first game in Liverpool and in the return leg… two penalties not given, a red card missed for Liverpool… that’s why we didn’t get to the final.

Were Madrid deserving winners?
Of course. They’re the best club, have the best players, and are the best team in the world. It’s no coincidence that they have won three Champions Leagues in a row. No-one has done it and there’s a reason for that. Nothing can take it away from them.

They say that Real always win the important matches right?
Madrid are champions because they have players with a lot of personality and character which make them a feared team with lots of experience. They’ve lost Cristiano Ronaldo but I think they’re the same.

And Roma? Do they have players with that personality?
Roma are a team that are developing. We have lost some important players, but we must not think about that and just focus on doing things well on the pitch.

What is Roma’s objective this season?
Return to the Champions League next season, finishing in the top 4. We know that Juventus is the strongest team in Italy, but we will be waiting for our chance. In the Champions League the aim is to get through the group stages and then not rule anything out.

Real Madrid and the Champions League go hand in hand right?
That’s what history says. Real Madrid have always been a strong team. No-one has achieved what they have. Or even got close.

The Bernabeu awaits Manolas with open arms…
It’s a very beautiful stadium, one of the best. It will be a pleasure for me to play there, have a good game with my team. I will give everything.

You are an idol for Real Madrid fans, do you know that?
(Laughs) Are you sure? We knocked Barcelona out with my goal, a team with so many champions. I don’t know if I’m an idol like you say but I will give everything for my team and whatever happens I’m sure it will be beautiful.

Are you expecting a tribute?
I don’t know. You’re saying it and it’s what you hear. For me it would be a pleasure if the Real Madrid fans gave me a warm welcome. I know they are expecting me.

How did you feel when you scored against Barcelona?
It was my happiest day in football. We were able to knock out Barcelona, such a strong team with Lionel Messi, Luis Suarez, Gerard Pique… A unique feeling, incredible so much happiness.

What were you thinking?
It was unique, unbelievable. Beating Barcelona 3-0 in the second leg! I don’t remember them losing 3-0. Paris Saint-Germain? I’m talking about a decisive game. It’s one thing to beat them and another to eliminate a team like that.

Are you scared of Real Madrid?
Never. We are not scared of anyone. Respect yes, but fear no. They have an amazing team, a great spine, great up front, at the back… but fear no.

Last summer people were speaking about Manolas and Real Madrid?
I haven’t spoken to anyone about Real Madrid. I don’t know what I can say. People can say a lot of things but I haven’t.

Serie A seems to have been taken over by Ronaldo, is there life in Italy beyond him?
Ronaldo in recent times has been at an incredible level, the best in the world. He has scored so many goals, won a load of Champions Leagues, a European Championship with Portugal, a load of good games. He has been at an incredible level and it’s normal to speak about him.

Soon there is The Best and the Balon d’Or prize, who would you go for: Ronaldo, Luka Modric or Mohamed Salah?
I don’t know. Maybe it’s time for a change. Modric has done a lot with Croatia and Real Madrid. Ronaldo does special things in every game, he scores goals… it’s hard to choose.

Who would you sign for Roma from Real Madrid, you are Monchi?
All of their players could play for Roma. It’s normal. Modric or Sergio Ramos, who for me is the best defender in the world and it would be a pleasure to play by his side.

And for Real Madrid from Roma? Manolas?
I don’t know. I can’t say that myself. I am a competitive player and I like to give everything. That I can say.