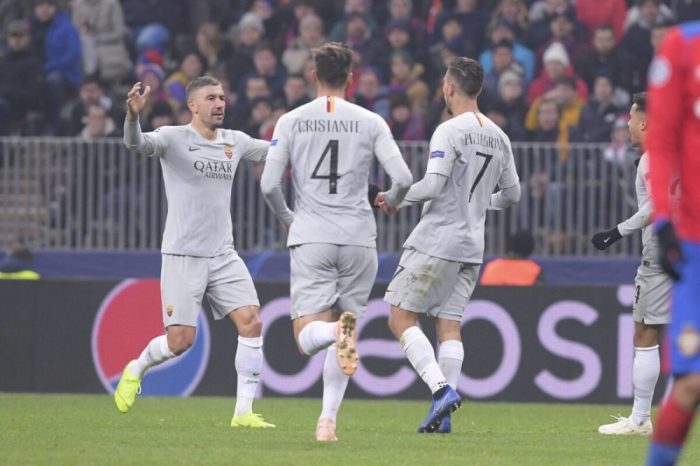 GK Robin Olsen: 6.5
Not much to say for Olsen who didn’t have any difficult saves to make besides the goal which he can’t be faulted for but seemed increasingly comfortable with the ball at his feet.

RB Davide Santon: 6
Struggled to continue his impressive form for Roma as he was easily beaten for CSKA’s goal.

CB Kostas Manolas: 7
Immediately followed up on his only defensive mistake with an impressive block and scored the vital early goal.

LB Aleksandar Kolarov: 6
Another game where he underperformed and seemed to desperately need a rest.

MF Bryan Cristante: 6.5
A refreshingly solid performance with a perhaps fortunate assist that made up for his and Kolarov’s poor marking and communication that almost led to a 2nd CSKA goal.

MF Steven Nzonzi: 7
After a relatively disappointing performance against Fiorentina, we received a classic performance from the formidable Frenchman where he consistently broke up enemy attacks and dictated the midfield with his calming presence and reliable passing.

RW Alessandro Florenzi: 5.5
The vice-captain had a difficult time and tripped over himself to waste a beautiful opportunity early in the first half that you’d bet on anyone to score.

AMF Lorenzo Pellegrini: 8 (Man of the Match)
Another assist for the Roman who topped off his impressive performance with a left-footed finish to lead the team to victory.

LW Justin Kluivert: 7.5
A breath of fresh air starting in his primary position. Won countless free kicks including the one that dealt CSKA’s red card and was robbed from a few assists by his teammates. Perhaps even more impressive were his defensive efforts that epitomized in the 1st half when Kolarov was breezed past but Kluivert was there and won back the ball deep in our own box.

ST Edin Dzeko: 5
Incredibly lethargic and seemed almost uninterested in the game where he left little besides frustration for the Roma fans watching.

Manager Eusebio Di Francesco: 6.5
His faith in starting Kluivert (finally) and Cristante was rewarded but let himself down with some questionable substitutions.

LW Cengiz Ünder: 6
Wasn’t given enough time to be impactful.

MF Nicole Zaniolo: 6
Did well until his age and inexperience got the best of him when he got greedy and went for goal.