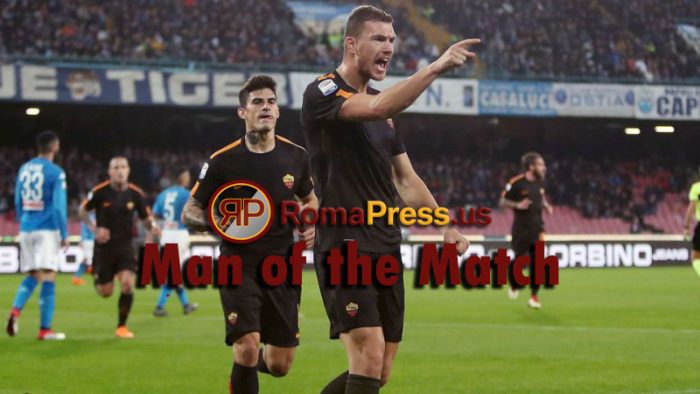 RB Alessandro Florenzi: 5.5
Florenzi had a marginal improvement in display against Napoli, but his defensive positioning is still lacking.

CB Kostas Manolas: 7.5
Very strong in defence and helped cover up some of the blemishes on the evening of Fazio.

CB Federico Fazio: 6
The Argentinian had far too many wayward passes but he was still steady in defence.

LB Aleksandar Kolarov: 6.5
Completely shut down Jose Callejon and had a number of sublime deliveries on dead balls.

MF Radja Nainggolan: 7
Nainggolan is slowly returning to form, was very strong on the night.

MF Daniele De Rossi: 7.5
The captain was fantastic in recovering the ball for Roma.

MF Kevin Strootman: 8.5
What a performance, the Dutchman completely dominated the midfield and negated Allan.

RW Cengiz Ünder: 6.5
Another goal for the Turk, another good performance.

ST Edin Dzeko: 9 (Man of the Match)
A brilliant headed finish for his first goal and topped it all off with a world class strike for the brace, was brilliant on the night.

LW Diego Perotti: 7
The attacking play all seemed to flow through Perotti, who was good and got a deserved goal.

Manager Eusebio Di Francesco: 7
Many questioned the technician’s choice to return to the 4-3-3 formation, but it proved to be the right decision.

RW Gerson: 6
Helped defend, but wasn’t given an opportunity in attack.