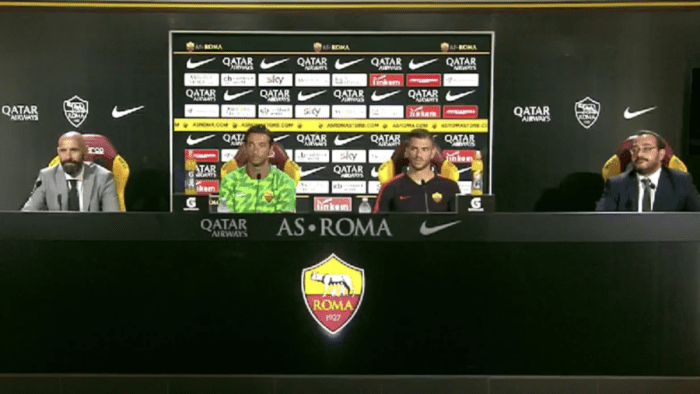 Monchi begins: “We are here for the presentation of two players who do not need any introduction, they are two well-known Italians. Santon and Mirante are two I have wanted for some time, today we are lucky to have them here, we are happy. Now we are ready for your questions”.

(To Monchi) What can Mirante bring to Roma?
He has made a very good path in Italian football, we were looking for a goalkeeper who could transmit trust and quality. We are happy and convinced that we have made a nice choice.

(To Mirante) What does Roma represent at this stage of your career?
It represents an important point of arrival for me, but also an ambition and a challenge with an important team. I was in the youth sector of an important team, but now I am mature, it is a source of great satisfaction and a great desire to work. I have to compare myself with a higher value than the one done so far, I have to prove to this club and this team my value.

(To Santon) What does Roma represent for you?
For me, it represents a reason to be reborn, for redemption. I came here because I want to show everyone how much I can give, that’s why I’m here.

(To Santon) Are you more of right or left back? What space do you think you will have?
At Roma there are great players, like Florenzi and Kolarov on one side and the other. I can play both left and right as I have done in the past. I have no preference to tell the truth. What I have to do is train hard and train with the desire to return to what I did in the past, then the Mister decides who plays. What I can assure is that I came here to give my best and I hope to carve out an important place in the team.

(To Monchi) What contribution do you expect from Santon?
I always have a thought in my way of working. I believe that a player never forgets how to play football. Sometimes a player isn’t able to express himself and he needs a change of scenery. He is a player with a lot of appearances, he won the triple with Inter, and there are not many here who have done so. I am convinced that he will find the right path. That’s why I’m happy.

(To Monchi) Did you read Sabatini’s interview? He said that Alisson will go to Chelsea for 70 million. Has Liverpool entered into the discussion?
I read the interview. I say jokingly that since he bought him and he knows where he will go (laughs). We all know the movements of the other clubs in football, but sometimes the information that goes around is not true. There is no update on Alisson. I imagine that all the teams that come out in the press are looking for goalkeepers, he is a strong goalkeeper. Anything more than this I can not say. I have a great respect for Walter, for what he has done and for his Romanity. Perhaps one day I can arrive at his level for love of the club.

(To Monchi) When is the deadline for the possible sale of Alisson? In the case of a transfer, the first name is Areola?
First of all, the desire to sell Alisson depends on Roma. Roma always evaluates what arrives and decides first for the good of Roma. I do not want to talk about substitutes, because I still think that Alisson has not left, he stays here. If the time comes, we’ll think about it. Now I do not want to think about other things. He is now resting, we will waiting for him in the United States. The deadline is not there, everything has time, but I can not say that the deadline is 5 August at 3 in the morning. When I leave here, I’ll read in the press I have calls from England, Germany, and Spain.

(To Mirante) Have you been close to joining Roma in the past?
Well yes, there was a small thing when there was the failure of Parma, then there was some talk last summer, but nothing special. The most concrete thing was in this transfer window and I seized this great opportunity, as soon as I had the feeling that it could be done I wanted to come here. I have not waited for other teams.

(To Monchi) Could Gerson leave?
The club’s trust in Gerson is at 100%. But we also thought that for his growth the chance to play lots of matches in a row is something he is missing. We are working with the lad and talking with him to find the right path for his journey while always thinking that he is a strong player.