Mkhitaryan unveiled: “I jumped at the chance to join Roma”. 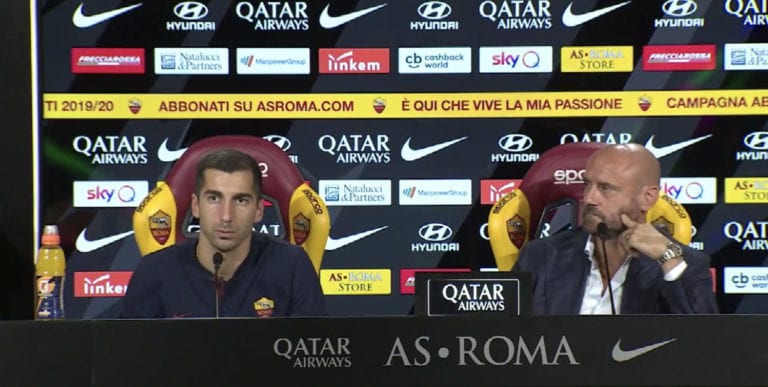 Henrikh Mkhitaryan was unveiled today by Roma following his loan move to the Giallorossi. These are his words during his presentation press conference:

“I’m happy to be here, I haven’t had an easy recent period of football. For me, it’s a new adventure that’s beginning, I know what the objectives are and I will do the best to reach them. The dressing room has a nice atmosphere. I talked to the manager and I think everything is there for me to do my best”.

In what role do you think you can be most useful in Fonseca’s Roma?
I can play in any position in attack, the important thing is to help the team, there are no differences if I play on the right or on the left. My quality lies in starting on the wide. I’m fully at the disposal of the team.

In your recent seasons in the Premier League, you had a low goal average. What were you missing to take the step forward?
With Armenia, I play behind the striker and I have more space. At Arsenal and at Manchester United, I started further back between the midfield and attack. My goal is to score as many goals and get as many assists as possible.

You blossomed at Shakhtar Donetsk. What do you think of Fonseca’s style of play?
I followed him during the Champions League and in the league, I didn’t get to analyse it in detail, but he has an attacking football and doesn’t have fear — he won games against great teams. I hope he can do the same here at Roma.

Do you have the ambition to return to the Premier League? Could Italy be your future?
I left England — it belongs in the past and I don’t want to talk about it anymore. I’m at Roma and I want to play in Serie A. I haven’t taken a step backward because it’s a great league and I’m in a big club. It was time for me to change environment and this opportunity presented itself and I seized it. For a player, it is important to take pleasure in playing football, in the last few months at Arsenal, I no longer felt that so I jumped at this opportunity.

Why did Arsenal decide to let you go on the last day of the transfer market?
It’s a difficult question, I’m not in the management team so I don’t know why they decided to let me go. It was my wish to leave as I decided I needed a change. I knew that Roma had a packed schedule as they have the league plus the Europa League — so thank you to sporting director Petrachi, who gave me the chance to come here.