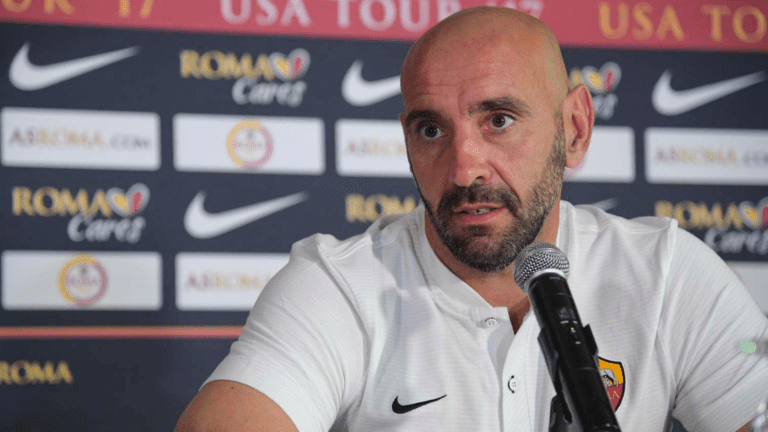 Roma manager Eusebio Di Francesco held his usual pre-match press conference ahead of his side’s tie against Inter. A surprise, though, was the presence of sporting director Monchi. These are their words:

Monchi begins: “I want to speak in Spanish because I want the message I send to be clear. I will also do so in Italian for the fans. I will take little time away from the Mister on the eve of such an important match, but we are forced to make things clear. For too many days now, Roma have been described in the papers as a club being dismantled. I even read we are selling players without their knowledge. This is a description very far from reality. It is not a fault to have so many strong players linked with big clubs. If a bid arrives, it will be my job as sporting director to evaluate. I am convinced I’ve made triple the amount of phone calls than I’ve received for other players. Roma is not hunting for offers around the world and does not want to downsize the roster. Our goal is always the same, reinforce the team. A sporting director is always happy when the names we are following do not get leaked out in the newspapers, but do not think we are sleeping.”

Will Dzeko play tomorrow?
Yes, he is very motivated and eager to do well, he will play from the first minute. I hope he can be decisive.

De Rossi? Florenzi will play as full back?
De Rossi will be called with the hope of being able to play tomorrow. Gonalons and Perotti will not be called up. Perotti I hope to recover for Samp, Gonalons will be out a little longer. Florenzi has the quality to play anywhere, based on his recovery, De Rossi will be evaluated. We have worked with Alessandro a little bit in all positions. I will not give a benefit to anyone of telling.

Do you want to send a message to the fans about the current situation?
I believe that we have already built a future. Beyond what Monchi said, I am calm, I want my players to bring forth good performances and attitudes, I do not like words, but actions and facts, which we’ve given few of in the last period. We have not proved to be what we were against Chelsea, we have lost certain attitudes. I hope to bring back the enthusiasm, we must spur on the fans. They supported us against Atalanta until the end, then they are free to either whistle or applaud. We need work, not talk.

Can transfer market rumors affect the players?
I hope not, but at the same time, I tried to raise the attention of our players, the professionalism of the players, their sense of belonging and slove towards this club. Managers hate the transfer market period because the player experience it differently. One strength can be to make the lads understand how to give the best of themselves.

Schick?
Unfortunately, I won’t talk about individuals. The team has done things well. You always ask me the same questions about Schick. He has to grow up, I always hear about formation, but if one does not have the right mindset, he struggles in every context. The answers will be given on the pitch, I’m happy with how he trained during the week.