Mourinho on first leg versus Leicester: “We’ll play to win.” 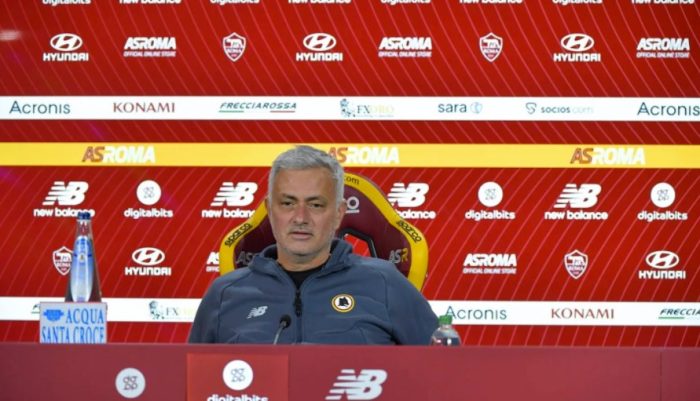 The Giallorossi face the Foxes for their first of their double-legged European semifinal affair at the King Power Stadium tomorrow at 21.00 CET.

“This is Roma’s third European semifinal in five years, which is a testament to the managers, the club, and the players,” said Mourinho of tomorrow’s affair.

“It’s always important when you make it to a semifinal. If you look at the possibility of a future Champions League place being tied to UEFA’s coefficient, Roma has a strong chance at being there.”

“Since day one I’ve said that this is our competition, we’re going to play our chances in the Conference League and go for it.”

“Tomorrow is our thirteenth match in this competition and it’s some at the cost of dropping points in the league. Teams with 30 players all of the same level can rotate and not pay with points, but we don’t have that.”

“We’re here despite having left important points on the table. We have to take this semifinal and fight until the very end of the competition.”

He added, “The goal tomorrow is to play the game to win, if we lose like we lost to Bodo then we’ll see in the second leg.”

“We’ll see what sort of formation and approach we use tomorrow, I don’t want to give anything away. But let me give you an example. We beat Lazio 3-0 with a less attacking formation. Then we defeated Bodo 4-0 using Pellegrini behind Zaniolo and Abraham.”

“The most important thing for me is that all of these players are available for tomorrow. This gives us several options in terms of formation, approach and also provides us with solutions off the bench.”

“But tomorrow’s objective isn’t only about getting a positive result simply to worry about the return leg in Rome. That can’t be the mindset.”

Mourinho was also asked about his friend and former Roma and Leicester City boss Claudio Ranieri, who stated he’d be supporting the Giallorossi in the tie.

“Claudio and I are friends. Certainly this will be a special match for him,” answered the Portuguese technician.

“I have been saying for years that many coaches in the Premier League have won many titles such as Ferguson, Wenger, me, Klopp, Guardiola. However, the one Ranieri won was the most special of them all.”

Ex-Roma goalkeeper Alisson: "I'll be supporting the Giallorossi tonight, I think we'll win."
| 25 May, 2022
Mourinho details Roma project ahead of Conference League final
| 25 May, 2022
Roma president Dan Friedkin: “We are convinced the club can achieve great things.”
| 25 May, 2022