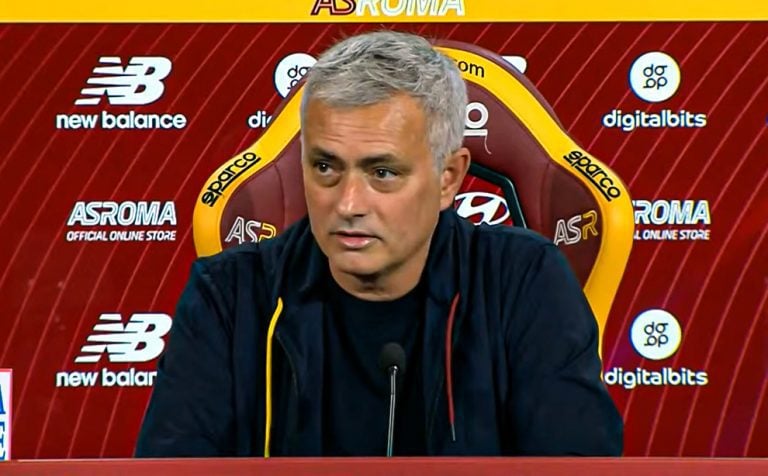 The Giallorossi host relegation-threatened Il Grifone days ahead of their Coppa Italia quarterfinals clash on Tuesday against Inter. But despite the showdown against the Nerazzurri looming, Mourinho asserted his side can’t afford to look past tomorrow’s affair.

“Nobody has even discussed or thought about Inter,” Mourinho asserted. “We’re only focused on Genoa.”

“Tomorrow’s game is way too important for us, we want to take all three points. We’ll only focus on Inter after tomorrow.”

“Genoa are a difficult team to face. They overhauled their team and have many more options at their disposal along with a brand new manager. That makes it tough for us to understand how they’re going to play.”

Mourinho then commented on the status of injured midfielder Lorenzo Pellegrini as well as the controversy surrounding Nicolo Zaniolo.

“Lorenzo’s not ready to play yet so he won’t be called-up. As for Zaniolo, I must say that what Pinto said was totally normal,” he said.

“He’s an honest, straightfoward sporting director that doesn’t hide or blow smoke. So it’s difficult say he will 100% be here next season.”

“Even if he said he could guarantee it, doing so might make the player unhappy. Players want to feel free. Anyway, there’s a lack of context when you isolated his response. You must be mature and not turn an honest answer and morph it into something that’s worthy of making the front page.”

He added, “And let me also say: I’ve done transfer markets with Chelsea, Inter, and Real Madrid. But I’m happy with our transfer market profile because we’re stronger today than we were on December 31st.”

“We offloaded four guys who didn’t play much and we added two players. Our goal is always to improve. But returning to Zaniolo, if my goal is to always improve, obviously the important players must always stay with us. At minimum, he’s our player until 2024.”

“Our roster is a lot more balanced now. We have a lot of options, particularly in midfield. While we don’t have a pure regista, we have a lot of different profiles. Sergio is more positionally aware while someone like Jordan offers more movement.”

“Then there’s someone like Bove, who’s improving and growing. In today’s football, teams need to be comfortable playing in different ways.”